BOUGHT IN - THE SUCCESS OF THE WILD'S SPECIAL TEAMS

Ask David Cunniff to explain the success of Iowa Wild’s power play this season and the club’s associate coach will immediately grab his whiteboard and a magic marker.

“When our power play is working, we have bumpers on both sides like Sam (Anas) and Cal (O’Reilly) and they are the ones who are always rolling downhill,” Cunniff explained as he quickly drew circles, then arrows and then circles again. “They are the threats to shoot, attack or pass. They are the ones who have all of the options. Then if they don’t like what they see, they have the option to simply roll back to the stop and start over.” 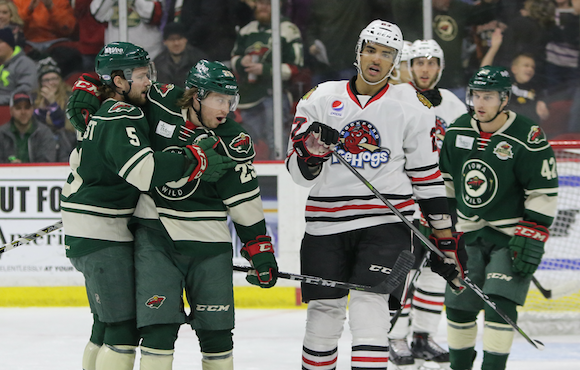 Ask Brett McLean, the Wild’s assistant coach, to explain the success of the Wild’s penalty kill units this season and the NHL veteran does it in one sentence.

“To be honest, it is the commitment from the players,” McLean said.

Whether the explanation is complicated or simple, one fact isn’t in dispute. Iowa Wild’s special-teams play this season is the best it’s been since the club moved to Des Moines and, right now, ranks among the best in the American Hockey League for the first time in franchise history.

As of the AHL All-Star break, the Wild ranks fourth among the 30 AHL teams on the power play with a 19.9 percent scoring percentage in its first 44 games. Similarly, the Wild’s penalty kill ranks sixth stopping opposing-team power plays 85.5 percent of the time.

The Wild’s effectiveness on the power play surfaced during the club’s 13 games in December when those units scored 17 power-play goals in 62 opportunities for a 27.4 percentage. Overall, the units – led by Luke Kunin and Justin Kloos with four goals each – scored on the power play in 11 games that month.

Those figures are startling compared to the problems the Wild had in the past when its best power play ranking was 18th (2013-2014 season) and its best penalty kill rank was 16th out of 30 (last season).

Derek Lalonde, the Wild’s head coach, said the success of both special teams has been instrumental in making the club a playoff contender this year.

“With the number of goals we have been giving up and our sporadic five-on-five play, our special teams have kept us in the playoff picture,” Lalonde said. “I give a huge amount of credit to David Cunniff and Brent McLean for their approaches.”

At the same time, Lalonde said that without players like Anas, who leads the Wild in goals, O’Reilly, who leads the team in assists and total points, the team’s power play surge wouldn’t have occurred. At the start of the season, the power play was ranked abysmally at the bottom of the league.

“It was the weakest part of our game for the first three weeks, the first month of the season,” Lalonde said. “We were flirting with the bottom of the league, but now it’s a very potent weapon at the top of league, which shows David deserves a lot of credit.”

🚨 SAM ANAS WITH A POWER-PLAY GOAL!

Anas, O’Reilly, Kloos, Kyle Rau and defenseman Zach Palmquist have been garnering most of the top unit minutes, largely because of their abilities to move the puck and to keep the puck in the attack zone.

“What makes them different is that the entire unit is selfless,” Cunniff said. “It is not about who gets the goal, it’s about getting the goal as a group. Each one of them can do something that will lead to a score, but it isn’t about anyone getting the goal.”

Palmquist agreed, suggesting the unit’s talent and commitment to each other are the essential ingredients.

“I am playing with good players who make my job easy. I can count on Anas and O’Reilly to make me look good. All of them win a lot of battles to keep the puck alive to be able to get it in the net.”

Similarly, the penalty kill has been successful largely because of the team’s commitment to forechecking and positioning in front of the net, McLean said.

“It is nothing new or special, but they are committed to what we are doing both on the forecheck as well as down in our zone,” he said. “They are paying attention to the details all the time that make a difference.”

McLean said the penalty kill units have been particularly efficient at key moments in games that provide the team with energy once the penalty time expires.

“You have to be willing,” he said. “Usually if you are in the right place you don’t have to worry so much about blocking shots. It’s about forcing them to make plays from the outside and not the inside.”

Cunniff and McLean specifically emphasized the willingness of the players on all the special team units to execute the strategies that they have laid out each game.

Anas said that kind of buy-in is essential for the rest of the Wild’s season if the club expects to make the playoffs.

“When you have only two or three guys buying in, it doesn’t work. But we now have all the guys who have bought in. It is good to see guys buy in,” Anas said.

Make no mistake about Anas’ buy-in.

“There’s definitely a smile on my face when the ref’s arm goes up against the other guys,” he said.