IN MEMORY OF TOM KURVERS

The Iowa Wild dedicated the Wells Fargo Arena press box to Tom Kurvers in November 2021. Kurvers served as the General Manager of the Iowa Wild from 2018 until his passing on Jun. 21, 2021 after a lengthy battle with lung cancer. Under Kurvers, the Wild reached the Calder Cup playoffs for the first time in franchise history in the 2018-19 AHL season and had its most prolific season in 2019-20 when Iowa finished 37-18-4-4.

A native of Minneapolis, Minn., Kurvers won the Hobey Baker Award at Minnesota-Duluth in the 1983-84 season and went on to play 659 games in the NHL with the Montreal Canadiens, Buffalo Sabres, New Jersey Devils, Toronto Maple Leafs, Vancouver Canucks, New York Islanders and the Mighty Ducks of Anaheim. Prior to joining the Wild organization, he spent 10 seasons with the Tampa Bay Lightning and 11 years with the then Phoenix Coyotes in various hockey operations roles.

Please use these links to fill out an application to attend Iowa Wild home games at Wells Fargo Arena.

SINGLE-GAME CREDENTIAL REQUESTS MUST BE MADE BY 4 P.M. CT THE DAY BEFORE A GAME (12 P.M. CT FRIDAY FOR WEEKEND GAMES).

Credentialed media and visitors may park in the lot north of Crocker Ave. between 5th Ave. and 3rd St. and enter the arena via the North VIP doors.

The Tom Kurvers Memorial Press Box is located between Sections 319 & 320.

For questions regarding broadcasts and team services, contact Ben Gislason.

Follow
Thanks for dropping the puck tonight, Grant! He sold over $30,000 worth of popcorn for the @mac_bsa326! #10WAGROWN 5 hours ago
Congratulations to Nick Swaney on being named our November Samuels Group Community Member of the Month! #10WAGROWN 5 hours ago
A big congrats to Sammy Walker for being named the AHL Rookie of the Month for the month of November! 👏 Walker tallied 13 points in 12 games for the Iowa Wild last month - here are a few of those highlights! #10WAGROWN 2 days ago
Sammy Walker currently leads AHL rookie skaters with 18 points and is tied for first in rookie scoring with nine goals! 👏 Here's his tally from last night's 5-3 win in San Jose! #10WAGROWN 2 days ago
We’re up 2-0 after twenty minutes in San Jose thanks to this beauty of a shorthanded goal from Joseph Cramarossa. That’s a goal in 3 straight games for Crammer 👊 3 days ago
Nothin' better than a celly 🎉 here's your @fireballwhisky Shot of the Month for November! #10WAGROWN 4 days ago
Our Coca Cola Local Concert Series this Saturday night features @jakekembleonguitar 🎵 Grab your tickets to the game at iowawild.com! 4 days ago
Happy Thanksgiving Iowa Wild fans!! Hear from the guys on what their favorite Thanksgiving foods are! #thanksgiving 1 week ago
If you need a gift for friends or family that will arrive before the holidays, take advantage of our Black Friday sale! 🎁 Our elves over at the office are wrapping up your merchandise orders and shipping them out right now! You can use the code THANKFUL15 for 15% off and $5 shipping until November 28th - just head over to iowawild.com and click on WildWear! 1 week ago
Looking for the best place to host a holiday outing for your employees? We have 17 home games throughout the months of December and January, so there's plenty of options! Head on over to iowawild dot com to check out our suites 🎁 1 week ago
Pucks N Paws Night is December 4th! The first 400 dogs in the building will be getting a FREE dog bag dispenser! 🐶 Find details at iowawild.com/pucksnpaws 1 week ago
Fan of WWE? Well get ready for WWE Night on Saturday, December 3rd! Come dressed as your favorite WWE Superstar at we lay the smackdown on the Chicago Wolves 💪 1 week ago
Follow 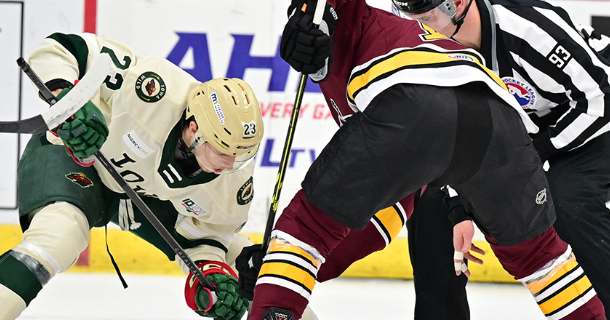 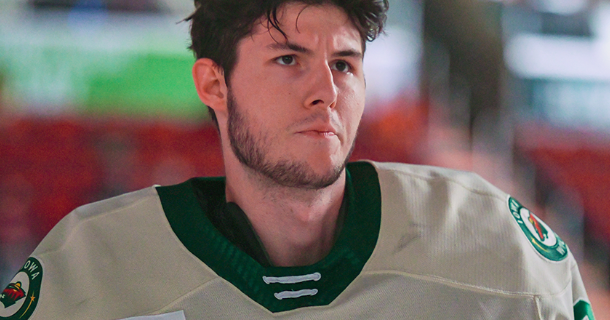 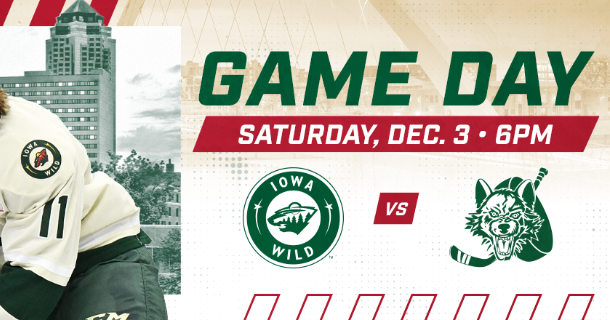 The Iowa Wild return to Wells Fargo Arena Saturday at 6 p.m. to take on the Chicago Wolves following a six-game road swing. Iowa… 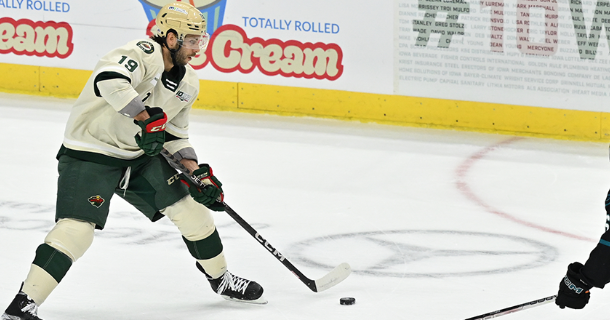 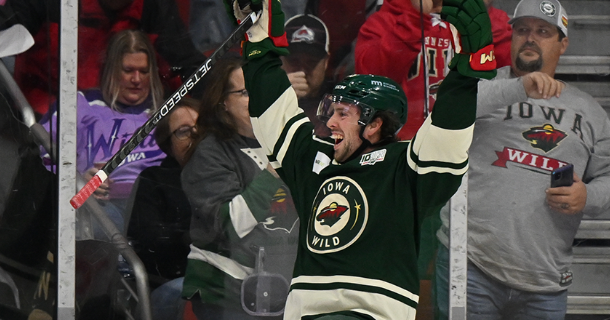 WALKER NAMED AHL ROOKIE OF THE MONTH FOR NOVEMBER

SPRINGFIELD, Mass. - The American Hockey League announced today that Iowa Wild forward Sammy Walker has been selected as the… 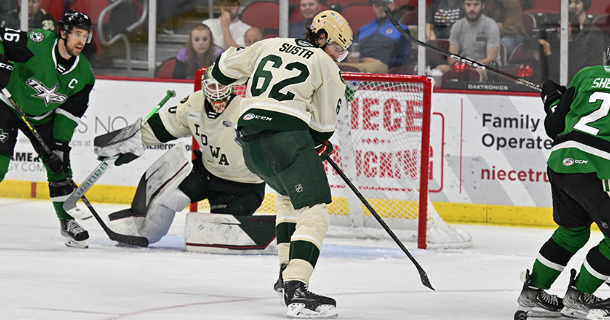 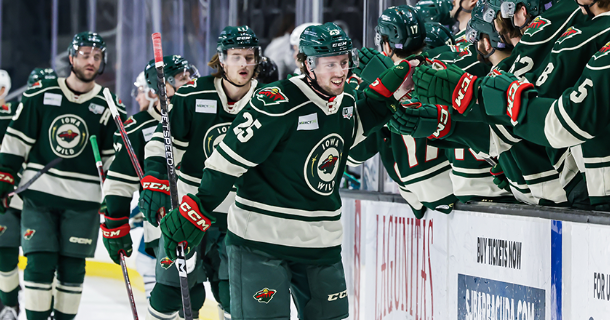 SAN JOSE, Calif. – The Iowa Wild wrapped up a six-game road stretch with a two-game sweep of San Jose, beating the Barracuda… 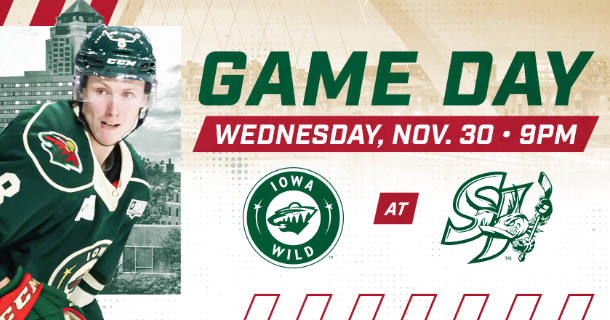 The Iowa Wild wrap up a six-game road stretch when they play San Jose Barracuda for the second time in two nights on Wednesday,… 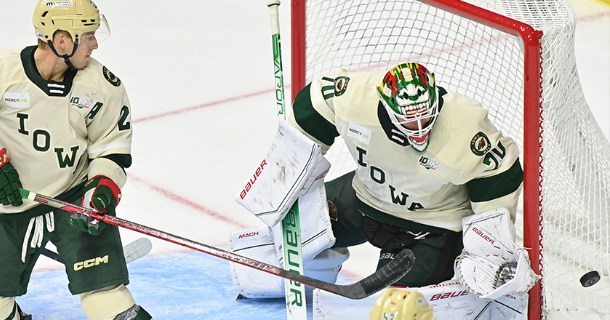