LIFE ON THE ROAD

Last weekend’s road trip for the Iowa Wild to Milwaukee and back to Des Moines in less than 48 hours while playing two games against the Admirals represented a major challenge for everyone connected with the team.

The teams split the series with Milwaukee winning a hard-fought match at home, 2-1 on Friday. Iowa returned to Des Moines to take a 4-1 victory and maintain its hold on the fourth and final playoff position in the Central Division.

Here’s how the trip went.

9 a.m. – Team practice begins and lasts about an hour. After practice, players are given time to get cleaned-up and ready for the road trip. Practice this week has been good, according to Lalonde. “This week we’ve had really good practices. They had a team party on Sunday so I don’t know if it was guilt, but they responded really well all week.” 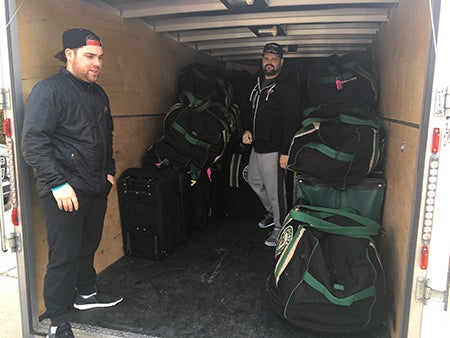 10:00 a.m. – Jody Green, the Wild’s athletic trainer, Mike “Tuna” Lefzcik, the Wild’s head equipment manager and Nate Belliveau, the equipment manager, begin loading the trailer that will be towed to Milwaukee by the bus. Inside the trailer is about 3,000 pounds of hockey equipment, tools (even a sewing machine), a portable propane torch, almost 100 hockey sticks, medical supplies, equipment, not to mention the bags for 22 players, three coaches, the media director and the radio play-by-play announcer.  Medical supplies and equipment takes up a lot of space as well. “We essentially have a portable medical unit that ranges from emergency equipment to over-the-counter pain relievers. If we don’t have it and need it, I will go buy it,” Green said.

10:15 a.m. – As the trailer is loaded, players, coaches and support staff board the specially-manufactured sleeper bus - which includes sleeping bunks for players as well as passenger seats and television monitors.  The bus also provides Wi-Fi access. 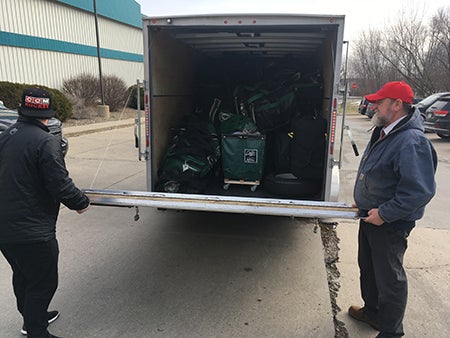 5:15 p.m. – Bus arrives nearly seven hours later in downtown Milwaukee at the Hyatt Hotel located less than a block from the UWM Panther arena, where the Wild plays the Admirals. Downtown Milwaukee is quite busy with heavy traffic mostly caused by the first round of the NCAA regionals being played at the BMO Harris Bradley Center that includes Iowa State playing Nevada that night.

5:20 p.m. — Players enter the lobby for check-in, which is provided at a separate table where room cards are available by name, as well as several tubs of various snacks. Rooms are shared by two players each.

5:35 p.m. – Lefczik and Belliveau board the bus for a quick one-block ride to the arena. The trip takes a few minutes longer as the driver has to negotiate with the exiting crowd from the NCAA’s afternoon session just across the street from the arena. 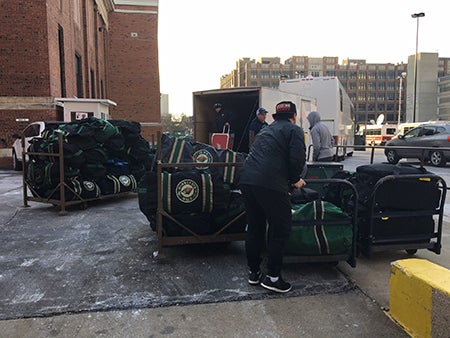 5:42 p.m. – Parked near a loading ramp at the back of the arena, the unloading operation begins with the help of several members from the Milwaukee Admirals support staff. “We all help each other to get the equipment in,” Green said later. “When a team arrives, the other team is there to help make sure they get it done.”  Unpacking also includes help from Josh Fisher, the Wild’s media director, and Joe O’Donnell, the Wild’s play-by-play announcer. Bags, carry-ons, boxes are placed on carts and guided down the ramp and pushed to the Wild locker room. 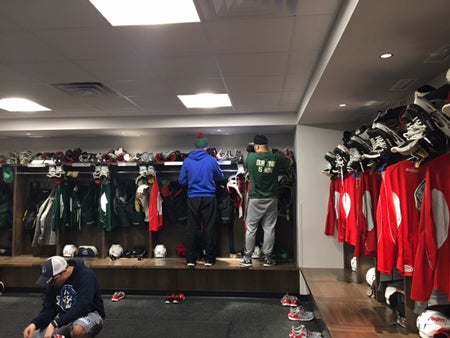 6 p.m. – All equipment is now unloaded and everyone on the Wild staff pitches in to get the locker room ready for the next day’s game.  Each locker is identified with a name plate and supplied with practice sweaters as well as each player’s individual equipment. Two players – Gerald Mayhew and Nolan Zajac – are so new to the roster, they have no name plate. Their lockers are identified as “new guy” and “newer guy.” 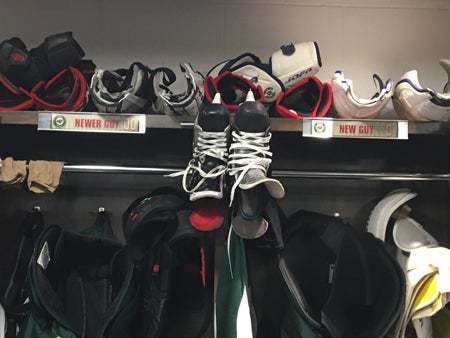 As Lefczik, Fisher and O’Donnell work in the locker room, Belliveau is setting up the work bench area just outside the locker room doors. The area looks more like a well-appointed in-home work bench complete with an array of tools, drills and saws.  Morning skate is scheduled for 11:15 a.m., so that means skate sharpening is between 8:30 a.m. and 9 a.m., Belliveau said. 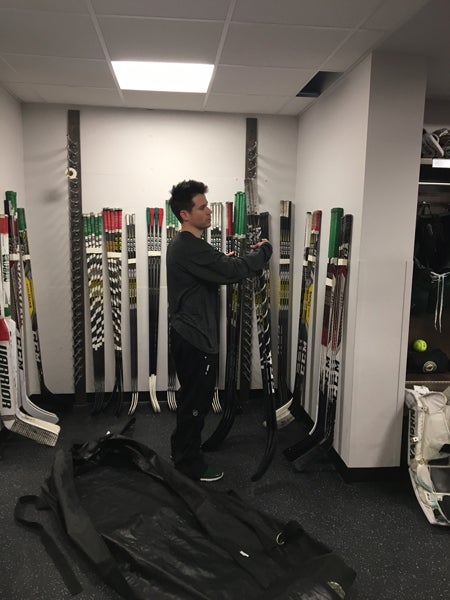 7 p.m. – Locker room ready for the team to arrive in the morning.  Green, Lefzcik, and Belliveau will have dinner with Lalonde and David Cunniff, the Wild’s associate coach at a popular Italian restaurant across the street from the Hyatt. Nearby their table are most of the players eating dinner together. 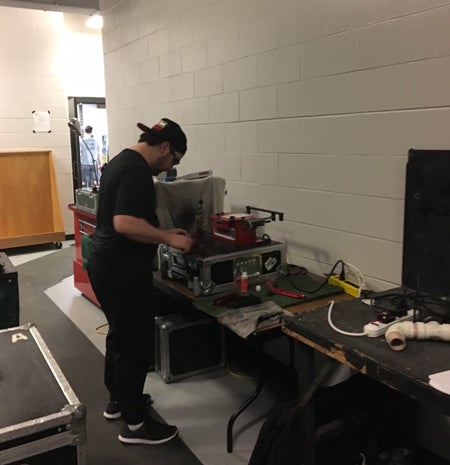 8:39 a.m. – Green is the first support staff member to arrive in the locker room. It’s a cold, wet, foggy morning off Lake Michigan in downtown Milwaukee so setting up the coffee machine is imperative.

It’s going to be a long day for everyone.

8:47 a.m. – Cunniff is the first member of the coaching staff to arrive. He changes into his practice togs and begins to prepare for his meeting with the power play units later in the afternoon. The club is on a three-game winning streak, but understands the Admirals are a tough, playoff-caliber team. Meanwhile, the Wild is still adjusting to the loss of several players to injury and call-ups. “We’ve had good practices,” Cunniff said. “This ought to be an interesting two games. “  Lalonde and Keith Paulsen, another assistant coach, arrive about 20 minutes later.

10:15 a.m. – Players begin to arrive in the locker room to get ready for practice. Almost immediately, the three stationary bikes have players warming-up, others grab a small soccer ball and move to a hallway where they kick the ball around. Much of the talk is about the results of the NCAA tournament on Thursday. The players also use the time to get their equipment ready including shortening their sticks with either a hack saw or electric table saw.

11:15 a.m. – Defenseman Hunter Warner and forward Adam Gilmour are the first players on the ice for the morning skate. The rest of the team follows then the coaching staff. Practice will last about 30 minutes except for Warner and Gilmour, who will be healthy scratches for tonight’s game. 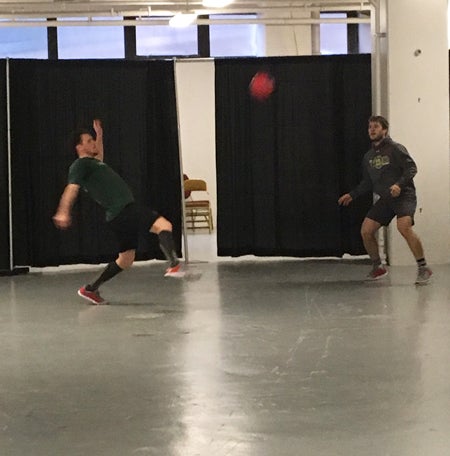 11:50 a.m. – First meeting of the day begins with Lalonde reviewing the penalty kill strategy with the team. Using clips of Milwaukee games and a hockey stick as his pointer, the coach emphasizes that position is key against the Admirals because of their disciplined attack. The meeting takes five minutes.

12:20 p.m. – Players complete their post-practice stretching and cardio work before leaving for the pregame meal. Meanwhile, Lefzcik and Belliveau complete the preparations for the game including hanging the game sweaters in each locker. 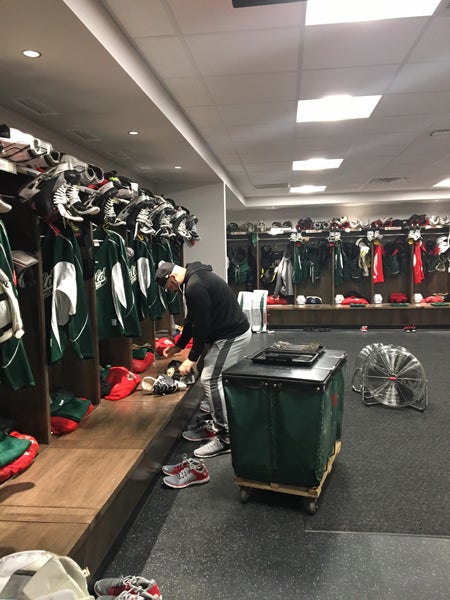 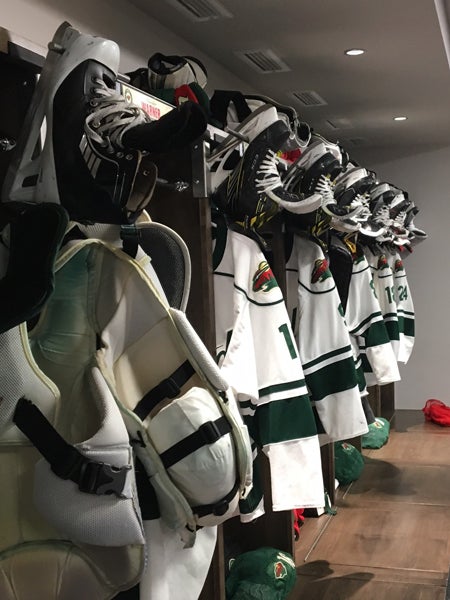 12:45 p.m. – Pregame meal is served. Menu includes soup, grilled chicken, pasta, meat sauce and alfredo sauce, green beans, dinner rolls with ice cream for dessert.  O’Donnell also visits with players and staff about the need for tickets for Saturday’s rematch in Des Moines. “I just need to get this done so I don’t have to deal with it tomorrow,” he said. After the meal, players and staff spend the afternoon in their rooms resting. “Just going to turn on the basketball games and maybe get a nap,” Lalonde said.

5:25 p.m. – Cunniff meets with the team to discuss tonight’s strategy for the power play units. “Expect a lot of pressure on the puck all night,” he tells the players as they view several Admiral clips. “Make sure you use reverse flow when it makes sense and move the puck to the open man,” he said.

5:30 p.m. – Team meeting directed by Lalonde emphasizes the Wild defense. The coach urges the team to “track, sort and funnel” when Milwaukee brings the puck down the ice. “We’ve been doing that well lately and did a great job of it last weekend. Understand this is a good team that we are facing, so it is a good test for us. Let’s get them.” 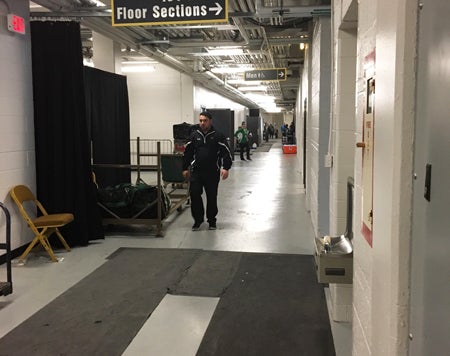 8:45 p.m. – Packing for the trip back to Des Moines is underway as the game is in the third period. “We want to make sure we can get out as fast we can,” Belliveau explained. “It’s a long trip home.”

9:20 p.m. -- In a closely fought match, Milwaukee gets two goals – one off the shin of an Iowa defender – and holds on to post a 2-1 win. Rookie forward Sam Anas scored Iowa’s only goal on a penalty shot midway through the 3rd period.  After the game, Lalonde said the team had played well. “It was a disappointing result, but we did a lot of good things.  I thought we had two pretty good periods particularly for being on the road. We got a couple of bad breaks that resulted in goals.” 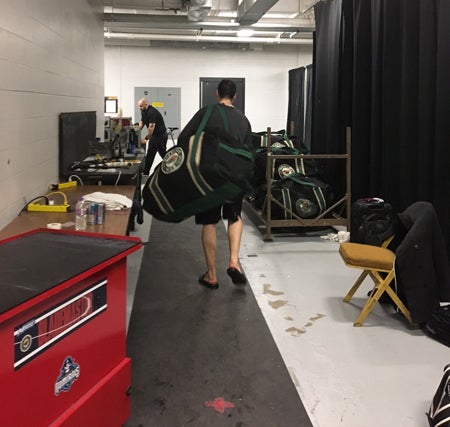 9:38 p.m. – Players are back on the stationary bikes for their postgame cool down and then clean-up for the trip home. A postgame meal is served near the locker room, but the players are quiet following the loss. 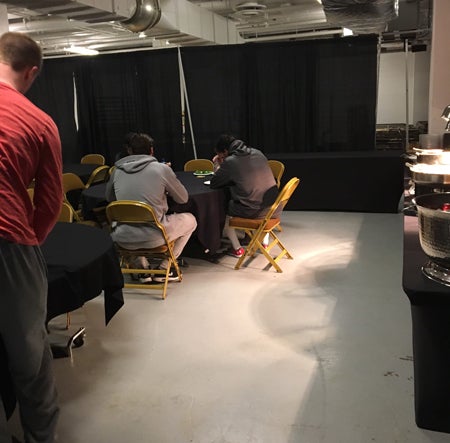 10:20 p.m. – Trailer is packed. Players, coaches and staff board the bus. The trip back to Des Moines begins in light rain, but clears up due to heavy winds out of the north.

4:30 a.m. – Team arrives at Wells Fargo Arena and staff begins to unload the trailer immediately. Lefzcik and Belliveau set up the locker room for Saturday’s game, which begins at 6 p.m., prior to leaving to get some sleep. But much of the equipment will remain packed and ready to reload for the team’s next road trip, which begins Monday.

That night, the Wild took an early 2-0 lead against Milwaukee, then expanded the lead to defeat the Admirals 4-1. As the Wild players left the building to get a good night’s rest, the Admirals were back on the bus for Milwaukee and a Sunday game against the Grand Rapids Griffins. The Admirals won 6-3.