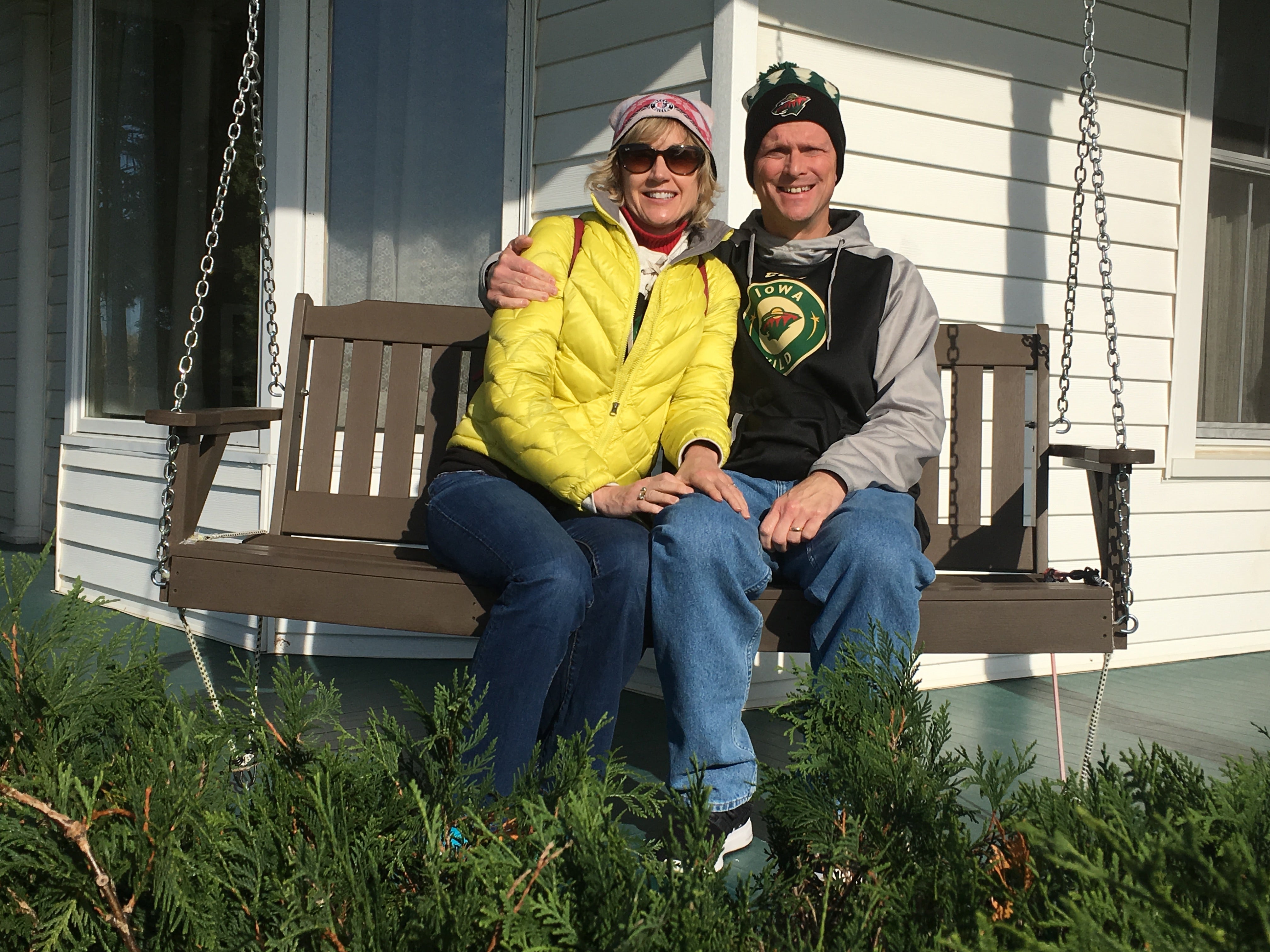 When Sue Army talks about her life as the wife of a veteran professional hockey coach, one must be prepared to laugh.

After all, she’s been able to keep her sense of humor as the Army family cheerleader, counselor and logistics officer for more than 30 years.

“I’ve been married to Tim for 33 years,” Sue Army said of her husband, Iowa Wild Head Coach Tim Army, with a sly smile and infectious laugh. “And I still like him.”

A professional hockey coach’s wife has a number of roles throughout the years and Sue Army understands them all.

“I’m the cheerleader and mover,” Sue said, who spent her early years growing up in Michigan’s Upper Peninsula. “I’m also the one that has to help pick of the pieces when something doesn’t go right. But all of it has been fun, all of it.”

To get a rundown on Sue’s married life, a tweet posted by her youngest son, Travis, on the day his father was named the Iowa Wild’s head coach provides a complete timeline in 218 characters. 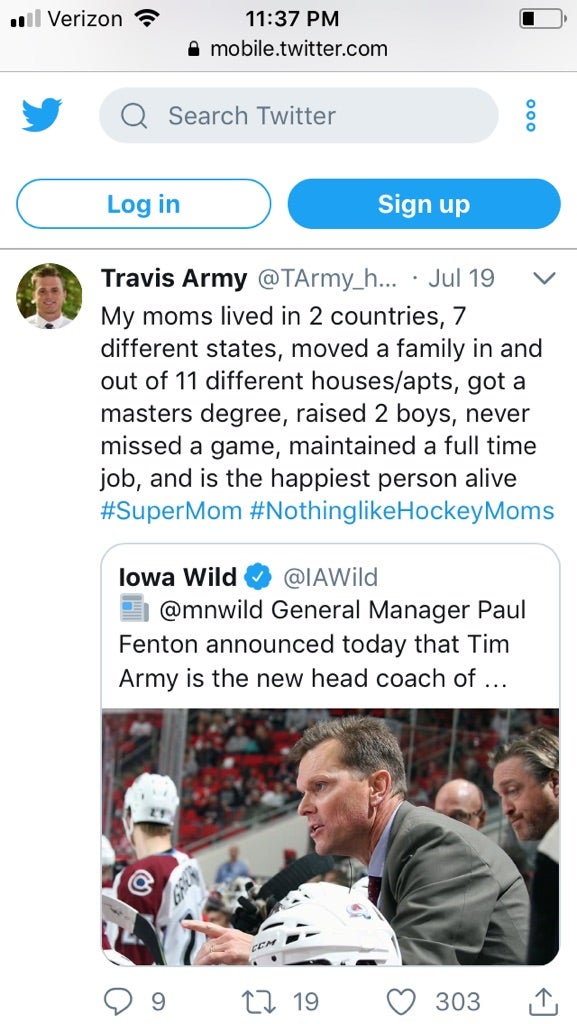 “That is absolutely Sue,” said Kathy Ferreira, wife of Minnesota Wild senior advisor Jack Ferreira, who has known the Army family since their days together in Anaheim when the Mighty Ducks started to play in the NHL in 1993. “She is the best person to know. If you are having a down day, give Sue a call. She has an ability to make anyone happy.”

Susan Montambo was born on Oct. 28, 1963, in Merrill, WI, the daughter of Keith Montambo, a mining company executive and his late wife Karen.  She and her brother, Scott, grew-up in Crystal Falls, MI, a small town on the Upper Peninsula.

But it was her father’s insistence that she and her brother attend high school in the Boston area that began the journey that has taken her to live in nearly every part of the United States.

“When we moved from Michigan to Boston, it was a bit of shock,” she said. “I knew everyone in my hometown, but when I got to the new high school, there were almost as many kids in my classes as lived in my old hometown.”

While attending high school, Sue exhibited talent on two fronts – in her mathematics classes and on the track team, where she ran well enough to land a partial scholarship to run cross country, indoor track and outdoor track at Providence College in Providence, RI

“I was running the quarter mile, 1600 meter, and all the longer races including cross country in the fall,” she said.

That’s also where and when she met her future husband, Tim, a Rhode Island native with a long family history in hockey. Tim’s father had been the first captain of the Providence College hockey team and now he was walking in his father’s footsteps to play for the Friars.

The two met in a science class both eventually would drop, but Sue already had decided she wanted to get noticed by the lanky hockey player.

“There was an empty seat between us so when they passed out papers, I’d get up and give it to him. Seriously, he never noticed me,” she said, adding that every time they saw each other after that “he’d just lower his cap and act as if ‘Oh lord he comes that girl.’”

The two became a couple and graduated the same year from Providence. Sue earned a bachelor’s degree in computer science and business management; Tim a degree in political science.

“We graduated in June and married in August,” she said, adding that their first move was to allow Tim to play for one season for the Maine Mariners in the American Hockey League.

Sue then set-up a household, but discovered quickly that her life would be one of learning to adjust as she had when she and her family left Michigan.

“I thought we would have this beautiful life of living in one place together forever and how awesome that would be, but I didn’t get that,” she said.

Instead, the family moved 10 times to a series of NHL and AHL cities. Their second coaching stop was in 1993 in Anaheim, where Tim had been hired by Ferreira and head coach Ron Wilson as an assistant coach for the inaugural season of Mighty Ducks of Anaheim.

That was where Sue met Kathy Ferreira and her husband, Jack, and would eventually get to know Paul Fenton, his wife, Nona, and Tom Kurvers, who would play his final NHL season with the Mighty Ducks. The group became close-knit, partially because all of them except Kurvers, who grew up in Minnesota, had lived in the Boston and Providence area.

“What I didn’t realize until I met Sue in Anaheim was that we were living in Providence at the same time,” Kathy Ferreira said. “I lived about two blocks from the college and she would run past my house just about every day.”

Sue said the years in Anaheim with two young boys weren’t easy, but discovered the secret all wives of hockey players and coaches discover – they had each other to help out when something wasn’t going well.

“I remember one time being so sick when the guys were on the road, I couldn’t move,” Sue said. “I called Kathy and she came right over to take care of the boys, which was no easy thing to do.”

That, she added, was when the group discovered a hockey team and staff become a family if only for a brief period of time. In some ways, that was the link that brought Tim to Des Moines to coach the Iowa Wild for Fenton, now the Minnesota Wild’s general manager, and Kurvers, the Iowa Wild general manager.

To that end, Sue recently put together a girls’ night out for the players’ wives and girlfriends in Des Moines on a game night. They went to a local cocktail lounge and got to know each other.

“It is important for everyone to be a part of the team. It is not just the guys,” she said. “When they come home, you have to make sure he is healthy and happy. But they all need a happy environment for the family to thrive.”

Over the years, Sue said, the family has adjusted well to the rigors of professional hockey that include great success and sometimes bitter disappointment.

The life of a hockey coach’s wife isn’t as glamorous as some would think, she added. Often, the job is coordinating children schedules around the husband’s schedule and dealing with a lot of situations on their own.

“I am the logistics coordinator. I’m the one who moves in and moves out with a snap of the fingers,” she said. “We are literally the Army Mash unit. Six plates, six forks, six cups, six everything. Able to move quick in and out. Less is more.”

Moving to Des Moines, she added, has been a pleasant surprise, but one that required her to help coordinate the move of a youngest son, Travis, to his second job, participate in the marriage of her oldest son, Derek, and to move their belongings from a rental residence in Wilkes-Barre, PA where they had spent the 2017-18 season, to Des Moines.

She learned of the move to Des Moines this summer at the couple’s permanent home in Falmouth, ME just north of Portland.  She calls it “my Barbie Dream House.”

“Timmy always said that when we are done, you get to pick where you live,” Sue said. “I picked there. Oh yes, the Barbie Dream House is a Hallmark movie.”

Since arriving in Des Moines, she has set-up her home office as an actuarial pension consultant for a Providence-based pension administration firm, while making sure she keeps tabs on all three teams her family coaches.