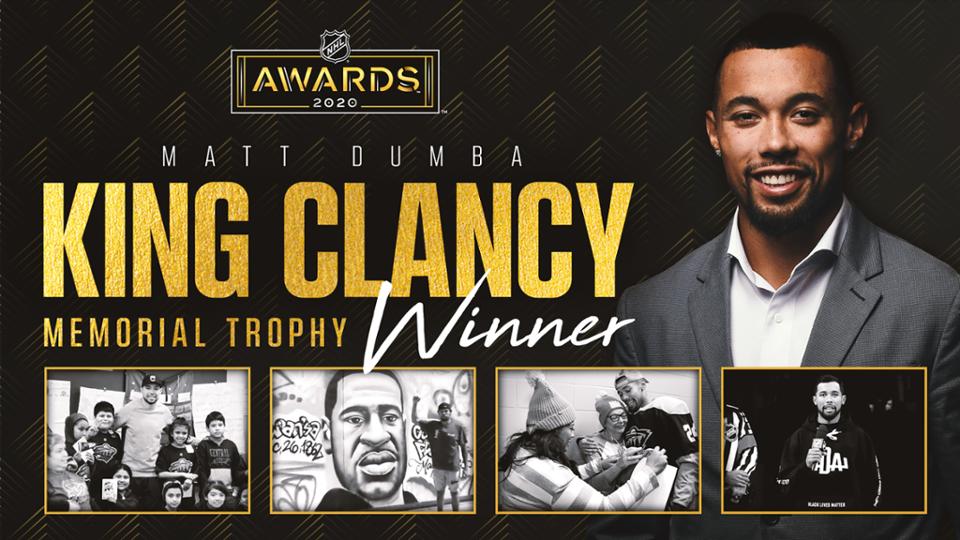 The National Hockey League (NHL) today announced Minnesota Wild defenseman Matt Dumba is the recipient of the 2020 King Clancy Memorial Trophy, awarded to the player who best exemplifies leadership qualities on and off the ice and has made a noteworthy humanitarian contribution in his community.

As the recipient of the 2020 King Clancy Memorial Trophy, the National Hockey League Foundation will donate $25,000 between Athletes Committed to Educating Students (ACES) and the Hockey Diversity Alliance (HDA).

Dumba's charitable aspirations grew in earnest during the 2019-20 season as he contributed his time, money, and effort to a number of community initiatives. The 26-year-old joined forces with six other current and former NHL players to help form the HDA. The alliance's mission is to eradicate racism and intolerance in hockey. One of the HDA's goals is to promote diversity at all levels of the game, using community outreach and engagement with youth, which will hopefully make the game more accessible and more affordable for more people. On June 18 he launched a fundraiser to support the Lake Street Council and their initiative to Rebuild Lake Street at rebuildminnesota.com. The fundraiser also helps Canadians facing discrimination by supporting ActionDignity. Matt pledged to match all donations up to $100,000. In addition, the Minnesota Wild and the NHL each donated $50,000 to Dumba's initiative to help rebuild Lake Street.

Dumba is in his fourth season as the Wild's ambassador for ACES, serving as an e-mentor to youth and providing Wild suites for ACES students and families to attend games. This season, he donated $5,000 to ACES during Give to the Max Day and made an additional donation on March 23 to more than 60 ACES families that have been impacted by the COVID-19 quarantine to help provide immediate and basic needs. The blueliner reflected on his 2019 trip to Australia and announced via his Instagram that he would donate $100 for every point the Minnesota Timberwolves (NBA) scored in their game on Jan. 7 to the New South Wales Rural Fire Service to help combat the fires and to care for the victims. The Timberwolves fell to the Memphis Grizzlies, 119-112, and Matt donated $11,200 to the cause.

Other notable charity causes Dumba contributed to this season included a surprise trip to Minnesota for his family friends, Melanie and Brian Biccum, for the Wild's Hockey Fights Cancer Awareness Night as Melanie was diagnosed with Lymphoma in 2019. Dumba also adopted his dog, Winona, during the COVID-19 quarantine from Coco's Heart Dog Rescue, a Minnesota organization the Wild has partnered with as part of their Adopt-A-Dog program.

Henrik Lundqvist and P.K. Subban were the other finalists for the 2020 King Clancy Memorial Trophy. A committee of senior NHL executives led by Commissioner Gary Bettman and Deputy Commissioner Bill Daly selected the winner.

The trophy was presented in 1988 by the National Hockey League Board of Governors in honor of Frank "King" Clancy, a beloved figure in the NHL for decades as a player, referee, coach, manager, and goodwill ambassador. A three-time Stanley Cup champion and 1958 inductee to the Hockey Hall of Fame, Clancy was voted as one of the 100 Greatest NHL Players during the League's Centennial Celebration in 2017.