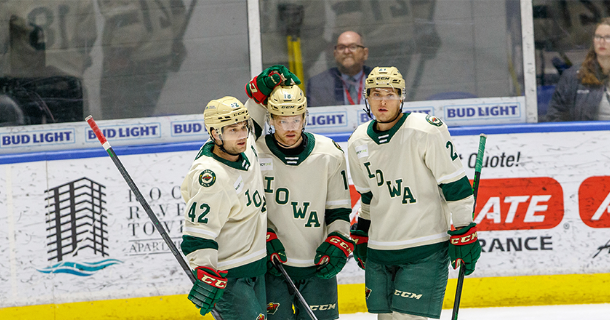 With Iowa on the power play, Wild forward Mason Shaw deflected a point shot off the stick of Wild defenseman Calen Addison past IceHogs goaltender Arvid Soderblom (34 saves) at 5:16 of the first period. Shaw’s goal gave Iowa a 1-0 lead and was assisted by Addison and Wild forward Marco Rossi.

A power play point shot from Wild defenseman Dakota Mermis hit Wild forward Nick Swaney in the slot and Swaney scored on a wrist shot after collecting the puck at 10:53 of the first period. Mermis and Wild defenseman Joe Hicketts recorded assists on the play and the goal gave Iowa a 2-0 lead.

At the end of the first period, Iowa led 2-1 over Rockford and the IceHogs held a 16-15 edge in shots.

IceHogs forward Cameron Morrison pushed a rebound chance past McIntyre at 5:07 of the second period to tie the game at two goals apiece.

A shot from Wild forward Mitchell Chaffee from the right circle deflected past Soderblom on the power play at 16:15 of the second period. Addison and Shaw were credited with the assists on Chaffee’s goal and the Wild led 3-2 following the tally.

Only Iowa managed to add to their total after Morrison’s game-tying goal and Iowa entered the second intermission up 3-2. Shots in the second period were even as both sides registered 12 in the stanza. Rockford led 28-27 in shots through two periods.

Rockford forward Mike Hardman followed up his own shot on the power play and scored on the rebound chance to tie the game 3-3 at 5:12 of the third period.

Rau accepted a pass from Wild forward Bryce Gervais and scored on a partial breakaway chance to give Iowa a 4-3 lead at 9:27 of the third period. Gervais and Mermis both recorded assists on Rau’s record-breaking goal.

The IceHogs pulled Soderblom for the extra attacker at 17:50 of the third period in an attempt to tie the game.

Rau scored his second goal of the game on the empty net with 50-seconds left in third period to extend Iowa’s lead to 5-3. The goal was unassisted.

Iowa held on to their two-goal lead through the end of regulation and secured a 5-3 victory. The Wild outshot the IceHogs 12-11 in the third period. Both teams registered 39 shots in the game

The Wild were hot on the power play as they went 3-for-5 and the IceHogs went 1-for-1 on the night.

The Wild head back to Des Moines to battle the IceHogs once again in their final regular season game on Wednesday, Apr. 27 at 5 p.m. CT.