Last night was the first game in a while where the Wild didn’t appear to have their legs. There wasn’t a whole lot of spark to their game and Iowa didn’t control large stretches of the contest.

Yet, they still earned a point via a 3-2 overtime loss at home to Grand Rapids.

That gives the Wild a seven-game point streak (4-0-2-1) and 28 points through 20 games overall, the most ever in the first 20 games of a season in team history.

I’m going to chalk up last night’s somewhat lackluster performance to the strain put on this team by the grind of the schedule in November. I mentioned it a few blogs back at the start of the month; November is a brutal month for the team with 14 games and several back-to-backs.

If my counting skills are on point – and that, at times, is a big IF – last night was the 10th game in 20 days for Iowa. That’s a lot of hockey. Earning a point when you’re not at your best is a true mark of a good team and that’s exactly what the Wild did last night. They got excellent goaltending (again) from Kaapo Kahkonen and a big third period goal from Cal O’Reilly to eventually force overtime.

The only caveat I’ll throw in here is that in both meetings against the Griffins in the season series (Nov. 2 and last night), Iowa was unable to dictate the pace for most of the game and was outshot heavily in both contests. Going into last night’s game, Head Coach Tim Army said the November 2 meeting was maybe the only game so far where the large portion of the 60-plus minutes was controlled by the opposition. That seemed to be the case again last night.

Both games required overtime, both were 3-2 scores and each team has won once.  Again, I’m going to chalk it up to a fatigued Wild team. However, it’s worth watching over the final four games of the season series if, for whatever reason, the Griffins just have some type of clear matchup advantage against the Wild. Sometimes that just happens in sports, where one team just seems to give you fits for whatever reason(s).

Overall, the Wild now has points in 10 of the last 12 games against the Griffins, which given the first four seasons of play between the two teams, is monumental in itself.

Next up, the Wild travel to Colorado to take on the Eagles. The Eagles currently hold a record of 9-7-3-0.

Last Wednesday the organization pulled off a trade with the Los Angeles Kings. In the deal, Minnesota acquired 6-foot-7 defenseman, Stepan Falkovsky. His nickname is “The Falcon” and he’s a monster of a man. Upon meeting him the other day in Winnipeg, almost every Wild player’s reaction was the same – damn, this guy is a monster. I even snapped a photo of his hockey sticks, which were lined up on a wall next to Luke Kunin’s lumber (Kunin is listed at 6-foot, so he’s not exactly short). 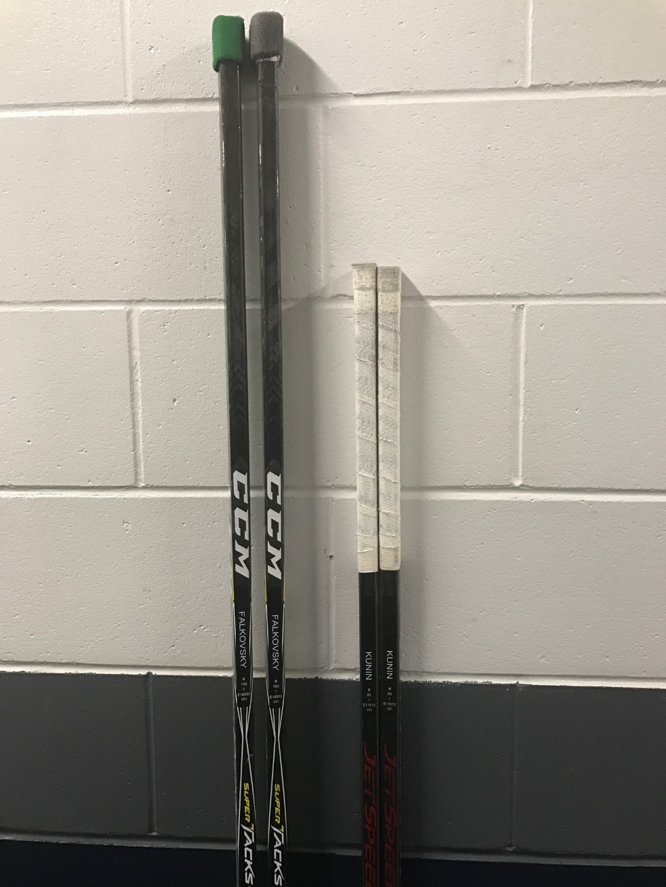 More on the Belarusian native can be found here.

I asked Iowa Wild GM Tom Kurvers about the move and he said they had been talking to the Kings for a bit and the move just kind of fit.

The trade sent winger Pavel Jenys to the Kings – Kurvers said they were looking for a forward. Jenys had been down in the ECHL with the Allen Americans all season. With defenseman Eric Martinsson leaving the Wild to return to his native Sweden a couple of days ago, the Wild wanted another D-man to “fill the hole,” according to Kurvers.

Falkovsky has yet to make his Iowa Wild debut, but he has been skating with the group. The Wild have eight “healthy” defensemen right now – I put quotes around healthy since 20 games into the season, it’s easy for me to sit here and say that everyone’s feeling great. The bumps and bruises certainly start to take their toll by this point in the long season.

Jacob Born and I will be back on the air tonight for “Hockey Gone Wild” (7-8 pm) on 1460, KXNO. Please tune in if you can. If you’ve got questions you’d like us to address, please shoot them my way on Twitter @WildJoeRadio

Wild forward Luke Kunin will join us in-studio and we’ll also have a conversation with Andrew Brunette, the director of player personnel for the Minnesota Wild. Plus, J. Born will have some fantasy hockey tips for ya.