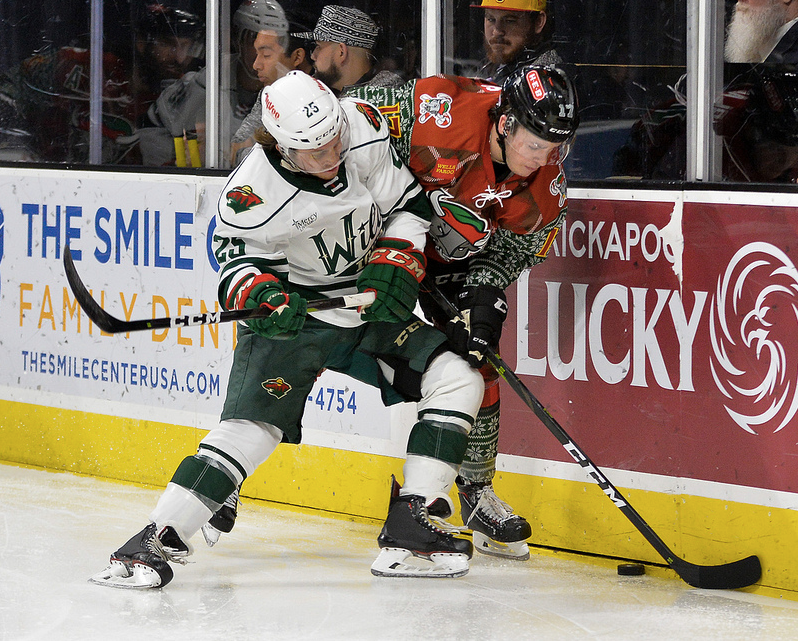 -The Wild’s 13th overtime game this season leads the league-

San Antonio took a 1-0 lead at 3:42 in the first period when forward Nikita Soshnikov scored his second goal of the season. Forward Jordan Kyrou had the puck on the left boards when he fed a pass to Soshnikov at the top of the left circle. Soshnikov then beat goaltender CJ Motte (31 saves) glove side for the goal. Defenseman Niko Mikkola recorded an assist on the play as well.

The Rampage extended its lead to 2-0 just 29 seconds later in the opening frame. Kyrou sent a pass to forward Trevor Smith in the high slot, who then wristed the puck blocker side on Motte and into the back of the net for his fifth goal of the season. Soshnikov notched his third assist of the year on the play.

Through one period of play, San Antonio led 2-0 and outshot the Wild 18-3.

The Wild cut into San Antonio’s lead when forward Gerry Mayhew tallied his eighth goal of the season at 18:28 in the second period. Defenseman Carson Soucy attacked the slot before shuttling the puck to forward Matt Read at the left faceoff circle. Read chipped the puck to Mayhew, who circled in the zone before cutting center of the ice, where he fired a long-range shot. Mayhew’s rifle found the back of the net, beating goaltender Ville Husso (24 saves) to bring the score to 2-1.

Wild forward Colton Beck tied the game at 2-2 with his ninth goal of the season, coming at 3:35 in the third period. Defenseman Brennan Menell took a shot from the left blueline that deflected up into the air off forward Landon Ferraro. Beck then batted the puck out of mid-air and across the goal line for the tally. Beck’s goal was his seventh point (3g, 4a) in his last four games and Ferraro’s assist was his first of the season.

Iowa took its first lead of the game when forward Justin Kloos potted his seventh goal of the season at 14:17 in the final frame. In the offensive zone, forward Matt Read sent a cross-ice pass to Kloos, who one-timed the bouncing puck past Husso and into the back of the net, giving the Wild a 3-2 lead.

The Rampage pulled even just 39 seconds later as Soshnikov recorded his second goal and third point of the night. After a missed shot from Smith, Kyrou circled in the offensive zone before being tripped up by the Iowa defense. Kyrou managed to slide the puck over to Soshnikov on the right post, who ripped a shot and then slammed home his own rebound to tie the game at 3-3.

At the end of regulation, the score was tied 3-3 and shots were 32-25 in favor of San Antonio. After a scoreless overtime, the game went into a shootout.

In the shootout, Wild forward Dmitry Sokolov scored for Iowa in the second round, waiting out Husso before burying his shot near the goal line. However, both forward Austin Pognaski and Kyrou found the back of the net for San Antonio and the Rampage skated away with a 4-3 overtime.

The overtime represented the 13th time 27 games Iowa has needed the extra frame to decide a winner, the most in the AHL. The Wild finished the game 0-for-4 on the power play and 5-for-5 on the penalty kill.

The Wild returns to the ice Sunday afternoon against the Rampage with a 3:00 p.m. puck drop.

The Iowa Wild 2018-19 season is presented by Mercy Medical Center and runs from October through April. For more information, please contact the Wild office by calling 515-564-8700 or by visiting www.iowawild.com.