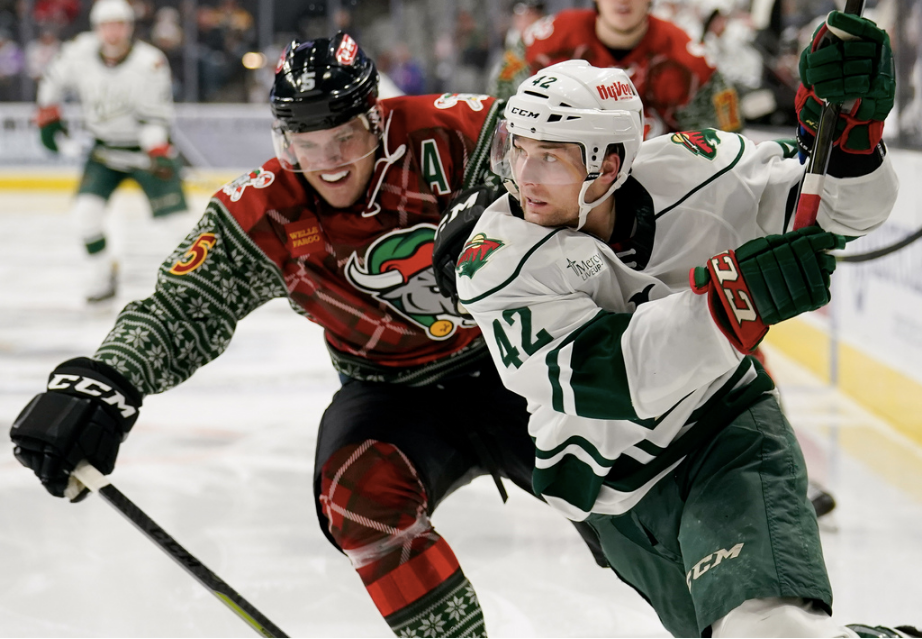 San Antonio opened up the scoring with a power-play goal by forward Klim Kostin at 17:44 in the first period. Kostin snuck into the slot and one-timed a pass from forward Zach Sanford, forcing goaltender Kaapo Kahkonen (25 saves) to make a glove stop. Kostin then picked up his rebound and backhanded the puck over Kahkonen’s left pad for the score. Forward Austin Poganski notched his fourth assist of the season on the play.

Rampage forward Chris Thorburn recorded his first goal of the season at 11:21 in the second period, giving the home team a 2-0 lead. Defenseman Niko Mikkola took a shot from the left blueline, which hit Kostin in the slot. Kostin shuttled the puck to Thorburn near the left post, who then put the puck past Kahkonen blocker side for the tally.

Iowa got on the board as forward Gerry Mayhew netted a buzzer-beater at the end of the second period on a 5-on-3 power play. With 0.4 seconds left on the clock, defenseman Brennan Menell sent a pass to forward Dmitry Sokolov at the right faceoff circle. Mayhew tipped the puck in front of goaltender Ville Husso (24 saves), floating it into the top left corner for his eighth tally of the season. Mayhew now has four points (2g, 2a) in his last five games.

San Antonio regained a two-goal lead when forward Jordan Kyrou found the back of the net with a one-timer at 6:12 in the third period. While on a power play, Kyrou received a pass from defenseman Joey LaLeggia at the top of the circles and beat Kahkonen blocker side for his sixth goal of the season. Forward Samuel Blais recorded his first assist of the season on Kyrou’s score.

The Rampage added another power-play goal at 9:17 in the third period while on a 5-on-3. San Antonio forward Trevor Smith took a shot in the slot that deflected off a Wild defender and directly Sanford on the left post. Sanford buried the puck into the open net for his third goal of the season. Kyrou registered the secondary assist on the play.

San Antonio recorded its fourth power-play goal of the game when defenseman Mitch Reinke beat Kahkonen over his glove at 10:06 in the third period. Reinke found a lane and walked in on Kahkonen after receiving a pass from Kyrou and wristed a shot into the top corner. Blais earned his second assist of the game on the play for his first multi-point game of the season.

Wild forward Matt Read potted his fifth goal of the campaign at 19:15 in the third period. Down near the goal line, Mayhew sent a cross-ice pass to Read on the right post. Read one-timed the pass over Husso’s glove and into the net, putting the game at 5-2. Defenseman Carson Soucy earned the secondary assist for his seventh of the year.

At the final horn, San Antonio defeated the Wild by a score of 5-2 and held a 30-26 shot advantage. Iowa went 1-for-4 on the power play and the four power-play goals allowed by the Wild in the contest are the most in a single-game this season and tied for the most in franchise history.

Iowa returns to Wells Fargo Arena for a season-high five-game homestand, starting with a 7:00 p.m. contest against the Stockton Heat on Friday, Dec. 21.

The Iowa Wild 2018-19 season is presented by Mercy Medical Center and runs from October through April. For more information, please contact the Wild office by calling 515-564-8700 or by visiting www.iowawild.com.