HOGS SQUEAL PAST WILD IN OT

Iowa Travels To Tucson To Meet The Roadrunners on Friday

DES MOINES, IA – Iowa Wild (2-4-1-0, 5 points) were defeated by the Rockford IceHogs (6-1-0-0, 12 points) 2-1 in overtime in front of 3,242 fans on Wednesday night at Wells Fargo Arena. Rockford forward Tomas Jurco scored the game-winning goal 1:16 into overtime, propelling the Hogs past Iowa and to their fourth straight win. Despite surrendering an early tally, IceHogs goalie J.F. Berube (5-0-0) settled in to make 17 saves for the victory.

Iowa forward Colton Beck set a new team record just 70 seconds into the first period when scored in his fifth straight game – beating the former record of a goal in four straight by Tyler Graovac and Teemu Pulkkinen.

The Wild struck for game’s first goal just 70 seconds into the game. Colton Beck snapped wrist shot over the left should and past the glove of Rockford goalie J.F. Berube. The goal set a new Iowa record for consecutive games with a goal at five straight. Pat Cannone and Zack Mitchell each had an assist as Iowa claimed a 1-0 lead. 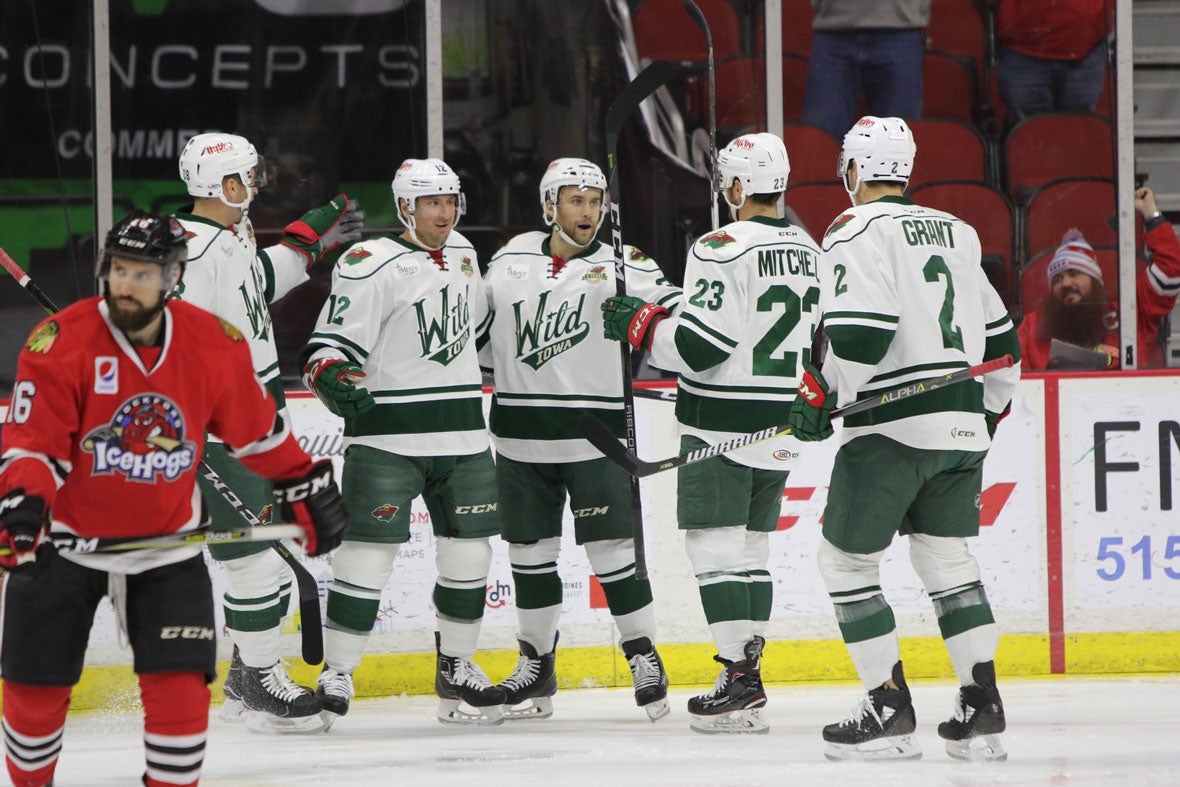 The IceHogs countered at 13:32 of the second period after Matheson Iacopelli potted a rebound for his third goal of the season and a 1-1 score. Just after a penalty kill expired to Iacopelli he jumped into an odd-man rush. Vinnie Hinostroza dropped pass to the high slot for the trailer and Iacopelli ripped a one-timer past Niklas Svedberg, tying the game one goal apiece. Luke Johnson added an assist on the play for the IceHogs.

After a scoreless third period, IceHogs forward Tomas Jurco carried the puck into the Iowa zone and snapped a wrist shot over the shoulder of Svedberg for the game-winning goal at 1:16 of overtime. Forward David Kampf and defenseman Carl Dahlstrom each had a hand in Jurco’s second goal of the season and the 2-1 win.

After a pair of road games in Tucson, Iowa returns home to meet the San Antonio Rampage on Thursday, Nov. 2 at 7 p.m. It’s Dollar dog night with $1 hotdogs, $1 pretzels and $1 small popcorns - presented by LAZER 103.3. Trivia night takes place in “The Fort,” previously known as the River’s Edge Restaurant, before the game.

Iowa and San Antonio faceoff again on Friday, Nov. 3 at 7 p.m. at Wells Fargo Arena. It is a Bus beer night with $2 beers presented by 100.3 The Bus. There is also a coat drive at the game. Fans receive a free weekday ticket voucher with a donation.

·       IOWA WILD IN THE COMMUNITY
To schedule a Wild appearance, email info@iowawild.com

·       IOWA WILD CORPORATE SPONSORSHIPS
To create a customized advertising package for your company contact Brian Mather, Senior VP of Sales and Business Operations, at 515-564-8720 or email at brian.mather@iowawild.com.