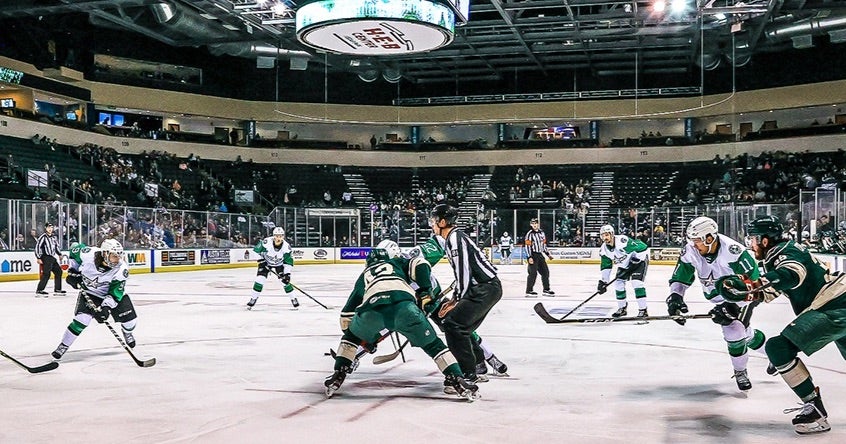 Texas opened the scoring as forward Nick Caamano deflected a shot from defenseman Ryan Shea past goaltender Dereck Baribeau (28 saves) at 7:09 of the first period to make the score 1-0 Stars.

Despite outshooting the Stars 14-9 in the first period, the Wild faced a 1-0 deficit heading into the second stanza.

At 7:37 of the second period, Stars’ forward Riley Damiani scored on a wrist shot from the high slot on the power play. Damiani’s goal gave Texas a 2-0 lead over the Wild.

Less than a minute after Damiani’s tally, Wild forward Marco Rossi scored on a wraparound chance at 8:14 on a feed from Joe Hicketts. Calen Addison was credited with the secondary assist on the goal, which made the score 2-1 in favor of the Stars.

At 6:50 of the third period, Riley Damiani scored his second goal of the game, and his second on the powerplay. The goal gave Texas a two-goal cushion as they held a 3-1 lead.

With just under three minutes remaining in the contest, the Wild pulled goaltender Dereck Baribeau for the extra attacker. Despite their efforts, Stars goalie Jake Oettinger (43 saves) held strong as Iowa fell 3-1.

Shots in the third period were 18-6 in favor of Iowa, and at the conclusion of the game were 44-31 in favor of the Wild.

On special teams, the Stars scored on two of their three chances on the man advantage, while the Wild were not able to capitalize on any of their six chances on the power play.

The Wild head home to prepare for their home opener on Friday, Oct. 22nd against the Rockford IceHogs.

Iowa Wild hockey is presented by MercyOne Des Moines Medical Center. For more information, please visit www.iowawild.com. The Iowa Wild home opener at Wells Fargo Arena is scheduled for Friday, Oct. 22 at 7 p.m. against the Rockford IceHogs. Fans can purchase single-game tickets through the team’s website at www.iowawild.com. Group tickets (10 or more), suites, Wild 365 memberships or premium tickets can be purchased by contacting the Iowa Wild Ticket Department at 515-564-8700 or tickets@iowawild.com.

Back to All
Image Gallery