With eight wins already this month, the Wild has tied the club record for most wins in a single month, a mark the club originally set last January. Two points against the Admirals tomorrow (Nov. 28 at 7 p.m.) would mean rewriting that stat in the record book.

Look, I understand the Iowa record book isn’t exactly laden with crazy-good, historical-type streaks…after all, I’ve been here since day one. But this team is playing really well right now and they’re finding ways to win by getting contributions from up and down the lineup. Plus, eight wins in a month (and possibly a ninth) is nothing to sneeze at…That is the correct expression there, right?

You do the math. Take the five “full” months of the AHL season (November – March) and slap eight wins on each of those, and you’ve got 40. Tack on a few wins in October and April (shorter months, schedule-wise) and now you’ve got a 90+ point team, which would most likely equal a playoff berth.

If it were that easy, of course, everyone would be doing it…. 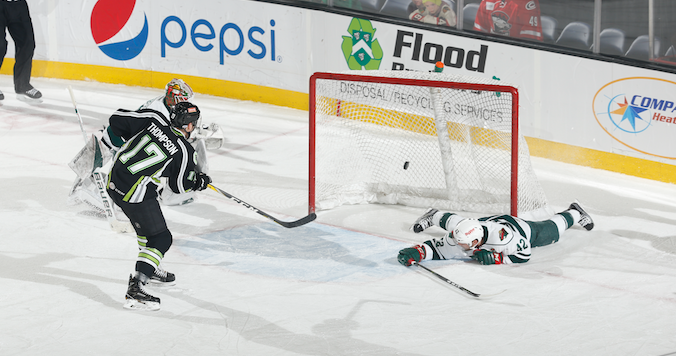 SOME RARE MOMENTS FROM A ROAD “W”

Yesterday’s 6-4 road win over the Chicago Wolves had a few unique situations arise.

Svedberg made the save, keeping Wild netminders perfect in penalty shot situations. The Wild did not face a penalty shot last season, but it did face one of those scenarios in each of its first three seasons.

In addition to Svedberg and Smith, the other goaltenders to face penalty shots are John Curry in 2014 (against Milwaukee’s Taylor Beck) and Johan Gustafsson in March of 2015 (versus Quinton Howden of San Antonio).

Back to yesterday’s win….

After Thompson was denied by the glove / left pad of Svedberg, Thompson felt he scored on another great chance with less than one minute to play in the second period. On the play, Wolves forward Stefan Matteau rushed in along the left wing side, faked a shot and wheeled behind the Wild cage. With Svedberg down and out, Matteau centered the puck to Thompson, who drilled it into basically an empty net.

However, Wild winger Kyle Rau had unintentionally knocked the net off its moorings as he was sliding back to defend the chance, and so the officials eventually decided the goal should not count. With the Wild leading 3-2 at the time, it was a huge spot in the game. But that’s not the only thing to note here, as the officials deemed the Wolves would receive a two-man advantage because they nabbed Wild defenseman Brennan Menell for a hooking minor (on Matteau who was flying towards the Wild net) and Rau for delay of game for knocking the net off. Officially, both penalties were at the 19:10 mark, so the Wild were down 5-on-3 for two minutes. The team successfully killed off the penalties, but it was a crazy sequence for sure.

MURPHY GETS THE CALL

Stick taps to defenseman Ryan Murphy for receiving his first call-up with Minnesota today. Murphy got wind of the transaction after the victory yesterday and he joined the big club in Winnipeg this morning.

He’ll become the ninth player to skate for both teams this season if he gets into a regular-season contest. That doesn’t include Svedberg, who backed up Minnesota goaltender Devan Dubnyk earlier this month.

Murphy posted four assists in his last two games with Iowa (both wins) and he’s earned a +8 rating so far in November.

Hopefully Iowa can keep it rolling…it certainly was nice to wake up this morning and see the team sitting in 2nd place in the Central Division!