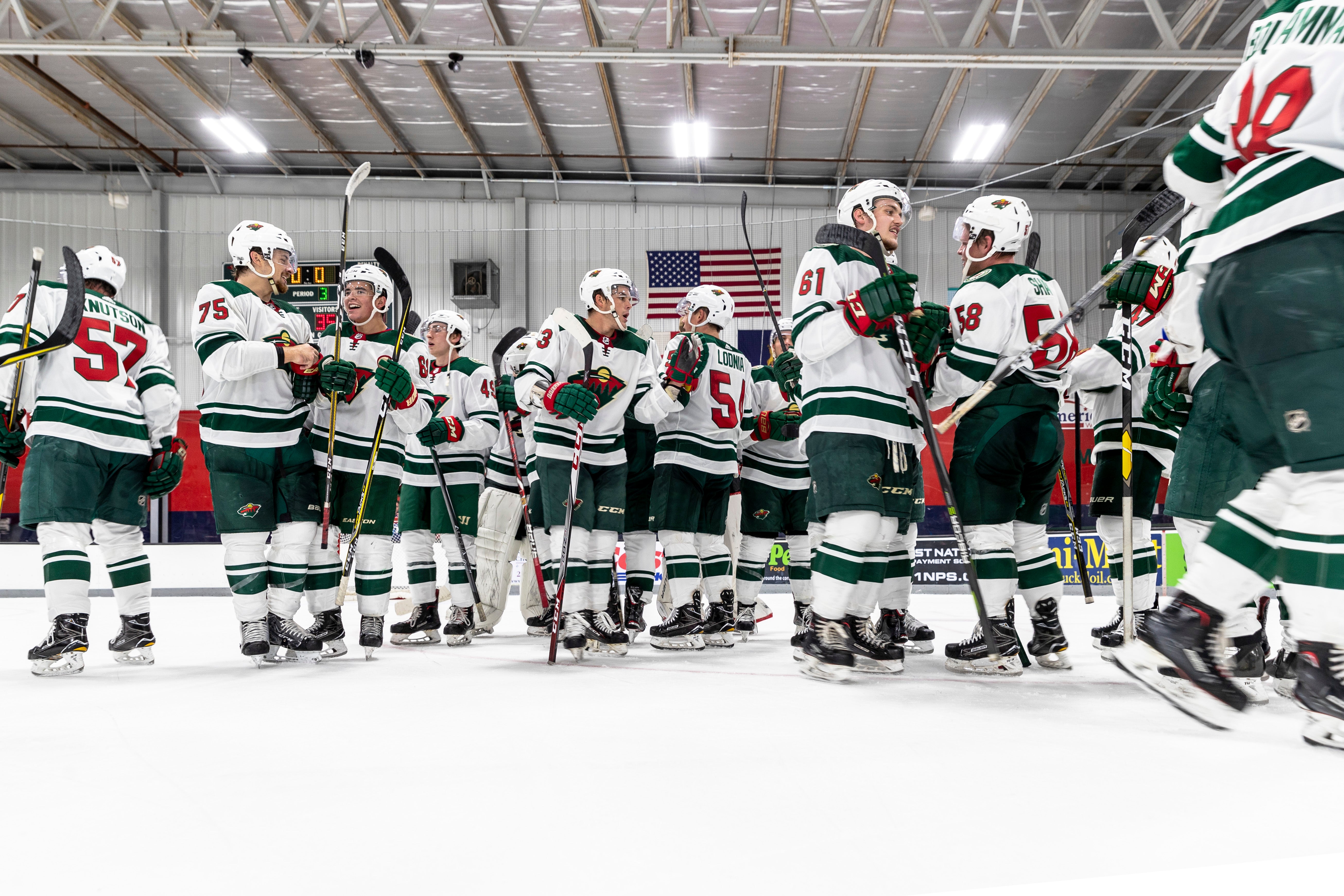 Hey Wild fans…Joe O’Donnell here.  Below you’ll find sort of a “running blog” of the 2018 NHL Prospect Tournament, which kicked off today in Traverse City, Michigan.

Each of the eight teams participating will play four games in five days (Sunday is a practice day for all of the clubs).

The Wild are in the Ted Lindsay Division, where they’ll play the Detroit Red Wings, New York Rangers and Dallas Stars.

Minnesota has won this tournament twice, as they claimed the title in 2003 and 2010.

Minnesota claimed third place in the 2018 NHL Prospect Tournament in Traverse City, Michigan with a 3-2 victory against the Chicago Blackhawks in the consolation game Tuesday night.

Goaltender Dereck Baribeau (23 saves) got the starting nod for Minnesota while Kevin Lankinen (19) was in net for the Blackhawks. Both goaltenders were participating in their second game of the tournament.

For the second time in the tournament, Minnesota opened the scoring, with forward Darian Pilon finding the back of the net just 2:27 into the game. The play started with linemate Mitch McLain and was facilitated by twin brother Drake Pilon, who found Darian with some pristine passing.

The Wild doubled its lead within the first 10 minutes of the game on a deflection from forward Alexander Khovanov. With sustained pressure in the offensive zone, Mattieu Foget corralled a loose puck in the slot and fired it on net and Khovanov got his stick on the puck to knock it past Lankinen. His goal came at 9:26 in the period and gave Minnesota a 2-0 advantage.

Taking a 2-0 lead into the second period, McLain registered the only score of the period at 6:48 in the frame. Standing on the left side of the net, Drake Pilon fed McLain a pass from behind the net. McLain slipped the puck past Lankinen’s pad and gave Minnesota a 3-0 lead, it’s largest of the tournament.

Leading 3-0, Baribeau carried his shutout into the third period, but eventually had it broken by Blackhawks forward Graham Knott on the power play. Knott’s score, which came at 5:53 in the final frame, was scored on the sixth consecutive extra-man effort for Chicago.

Blackhawks forward Radovan Bondra cut Minnesota’s lead to one when he beat Baribeau at 8:22 in the third period. But over the final 12:44, Baribeau kept everything in front of him.

When the final horn sounded, Minnesota earned the 3-2 victory and finished in third place for the tournament. Chicago outshot the Wild 25-22 in the third-place game.

With the win, Baribeau secured his first career victory at the NHL Prospect Tournament. The tournament also marked the first time since 2010 the Wild earned three or more victories. Minnesota finished the tournament 20-of-23 on the penalty kill.

Minnesota Wild training camp begins Friday, Sept. 14. Minnesota Wild and the St. Louis Blues will play an NHL Preseason Game, presented by Mercy Medical Center, at Wells Fargo Arena on Sept. 19. A limited supply of tickets are on sale and to purchase, visit iowawild.com or call the ticket office at 515-564-8700.

In what was a back-and-forth affair, Minnesota came out ahead against Dallas with a 5-4 victory in the shootout, finishing second in the Ted Lindsay Division and a shot at a third-place finish Tuesday.

Dallas scored the first goal of the game at 15:20 in the first period with a power-play tally off the stick of forward Jason Robertson, potting his first score and fifth point of the tournament.

Four minutes later it was defenseman Brennan Menell who answered for the Wild, going bar down from the point with Minnesota on a 5-on-3 power play. Menell’s goal was his first point of the tournament, coming with less than a minute left in the frame, with forwards Mattieu Foget and Ivan Lodnia getting the helpers.

The Wild started to pull away in the second when the team notched two goals in a 62-second span. Forward Alexander Khovanov put Minnesota in the lead with a one-timer thanks to a cross-ice pass from forward Zeb Knutson at 14:54 in the middle stanza. Then at 15:56, forward Gerry Fitzgerald utilized his speed and blew past the Dallas defense, sneaking a shot through the five-hole of Dallas goaltender Colton Point (23 saves) to give Minnesota a 3-1 lead. With Fitzgerald’s goal, Lodnia notched his second assist of the game.

Dallas responded with three consecutive goals in the third period, erasing Minnesota’s lead and eventually creating a one-goal hole for the Wild. Robertson scored his second of the game and then 2017 No. 3 overall pick Miro Heiskanen recorded two of his own, eventually giving the Stars the lead at 16:41.

Timely stops by Wild goaltender Kaapo Kahkonen (36 saves) including a penalty shot in the third period, kept Minnesota in the position to where Foget could once again tie the game. After receiving a pass from Fitzgerald, Foget took a shot down low near the goal line, which deflected off a Dallas defender and into the back of the net to send the game to overtime.

In the extra frame, both teams had multiple odd-man rushes, creating end-to-end action. But neither Kahkonen nor Point surrendered a goal, making big saves in the five-minute overtime, forcing the game to end with the shootout.

Minnesota went first in the shootout, and a goal by forward Dmitry Sokolov gave the Wild an early lead. Kahkonen then stopped Robertson and forward Adam Mascherin while Point stoned Fitzgerald. In the third round, Khovanov secured the win when he beat Point.

With five points in the three round-robin games, Minnesota finished second in the Ted Lindsay Division and will battle the second-place team from the Gordie Howe Division Tuesday at 5:30 p.m. Fans can watch the game on wild.com or Fox Sports Go.

Dereck Baribeau (22 saves) got the start in net and suffered the loss, as the Rangers jumped out to a 3-0 lead and then hung on for the win.

The Wild started slowly, with New York controlling most of the first period. After 20 minutes of play, the Rangers led 1-0, and they outshot the Wild 10-6.

New York eventually opened up a 3-0 lead midway through the second period, before Wild winger Dmitry Sokolov converted on a power play. Sokolov’s second power play tally of the tournament came with just seconds remaining in the stanza. Damien Giroux and Mason Shaw registered the helpers, as Sokolov snuck a shot just inside the short side post from the left of Rangers goaltender Jeremy Brodeur (24 saves).

The Wild carried that momentum into the third period, where they heavily outshot the Rangers and drew multiple power play opportunities.

Forward Jordan Greenway struck at the 9:41 mark of the third to trim the Rangers lead to one, but Minnesota was unable to pull even down the stretch.  Ryan Lindgren sealed up the win for New York with an empty net goal at 19:18.

The final shots were even at 26 apiece.  Minnesota went one-for-seven on the man advantage, while the Rangers power play finished zero-for-three.

“I think we had a slow start.  First period was kind of tough.  Near the end of the second [period] and in the third we started to use our speed and manage the puck and play our game, but yeah, just a tough start overall, I think.” – Gerry Fitzgerald, Wild forward, on the loss to the New York Rangers

Minnesota got off to a great start in Traverse City, as they doubled up the “host” Red Wings in the opener.

The contest featured a ton of special teams play, especially in the second period, where the Wild were called for the only four penalties in the stanza.

Winger Dmitry Sokolov opened the scoring for Minnesota near the midway point of the first period, as he snapped a shot past Red Wings goaltender Patrik Rybar (31 saves) for a power play goal.

Detroit tied it late in the opening period, when Filip Zadina, the sixth overall pick this past June, rifled a one-timer past Kahkonen for the team’s only power play strike of the affair.

Minnesota jumped back in front late in the second period as forward Ivan Lodnia converted from in tight, making it a 2-1 game before the second intermission.

Less than five minutes into the third period, it became 3-1 off a beautiful shot from Gerry Fitzgerald, a left-circle blast which came just after a Wild power play expired.  Both goals were set up by 2015 second round pick Jordan Greenway, who turned in an impressive performance in his Traverse City debut.

However, the Red Wings answered 61 seconds after Fitzgerald’s tally, as Kahkonen got beat on a long shot, which found its way through a hefty screen in front.

Protecting a one-goal lead down the stretch, Minnesota put forth a stout defensive effort, holding the Red Wings to just five shots in the third period.

Damien Giroux, a 2018 draft pick, iced the win for Minnesota in the closing seconds, as he sent the puck into the empty-net from just outside the offensive blue line.  Fellow 2018 selection, Connor Dewar, added the only assist.

The line of Greenway (2a), Fitzgerald (1g, 1a) and Lodnia (1g, 1a) each recorded two points in the win, allowing Minnesota to start 1-0-0 for the second straight year here in Michigan.

“It’s something we want to do, is try to get to that final game this year.  That’s kind of what we’re gunning for.” – Mason Shaw, Wild winger, following the 4-2 win over Detroit