WHERE ARE THEY NOW? A LOOK AT FORMER IOWA WILD PLAYERS

As the new season approaches, new players descend on to new teams to begin another campaign. For fans, it means welcoming new players to their team while also saying goodbye to some fan favorites. And when players leave, sometimes fans lose touch.

This week, we’ll take a look at a few former Wild players and what they have been up to since donning an Iowa sweater. 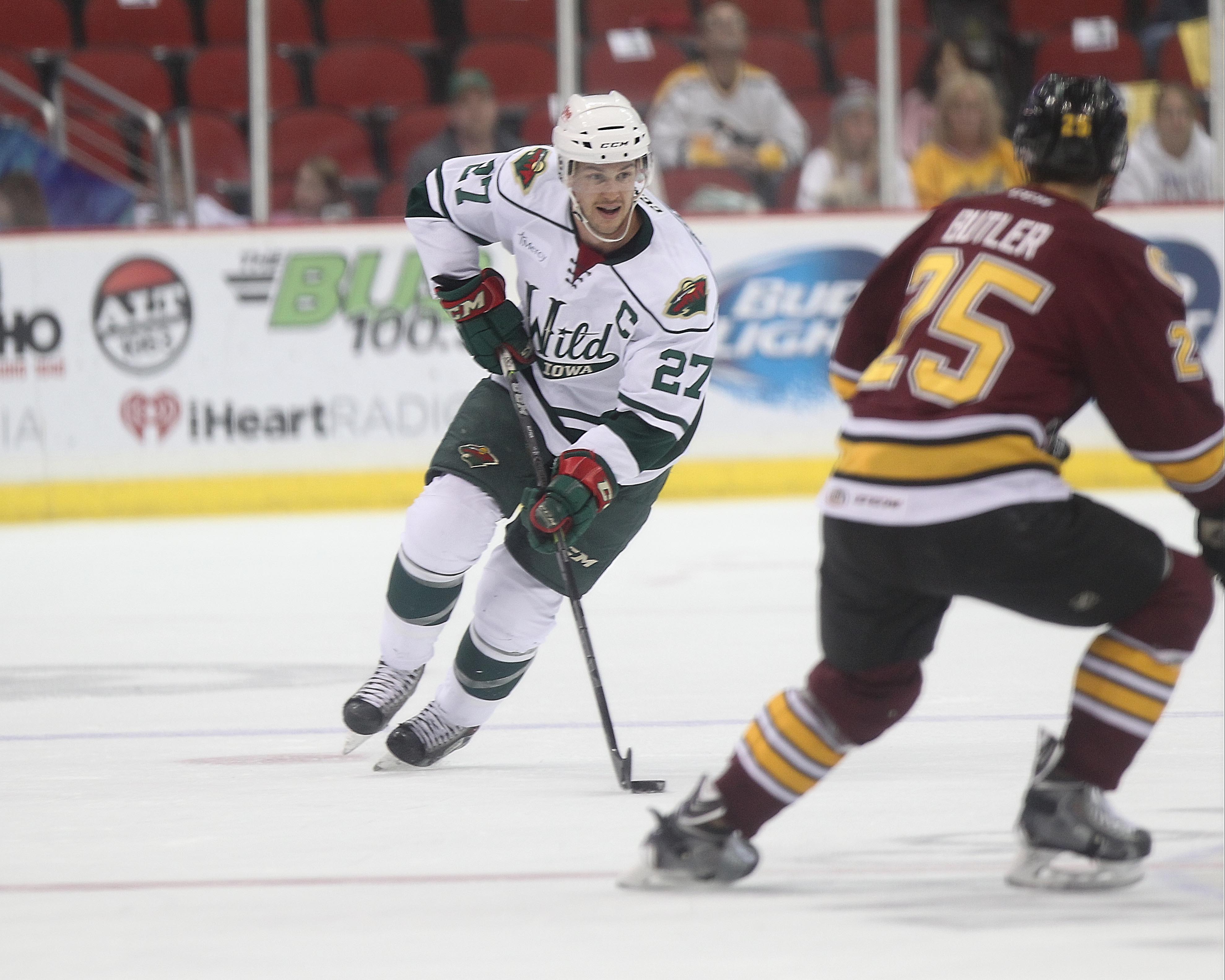 Veilleux is a name Wild fans should be very familiar with, playing two seasons in Iowa while wearing the captain’s “C” his final season with the Wild. Veilleux was originally selected by Minnesota in the 2001 NHL Entry Draft in the third round (No. 93 overall) and spent 12 seasons in the Wild organization in two different stints. Overall, Veilleux played 94 games with Iowa, 262 games with Houston and 428 with Minnesota.

Veilleux played his final season with the Wild in 2014-15 and then proceed to play three more years with the Oji Eagles of Asia League, a professional league consisting of teams from Japan, Russia and South Korea. In 2017-18, he led the entire Asia League in playoff scoring but his team fell in the finals. Veilleux retired following the 2017-18 season. 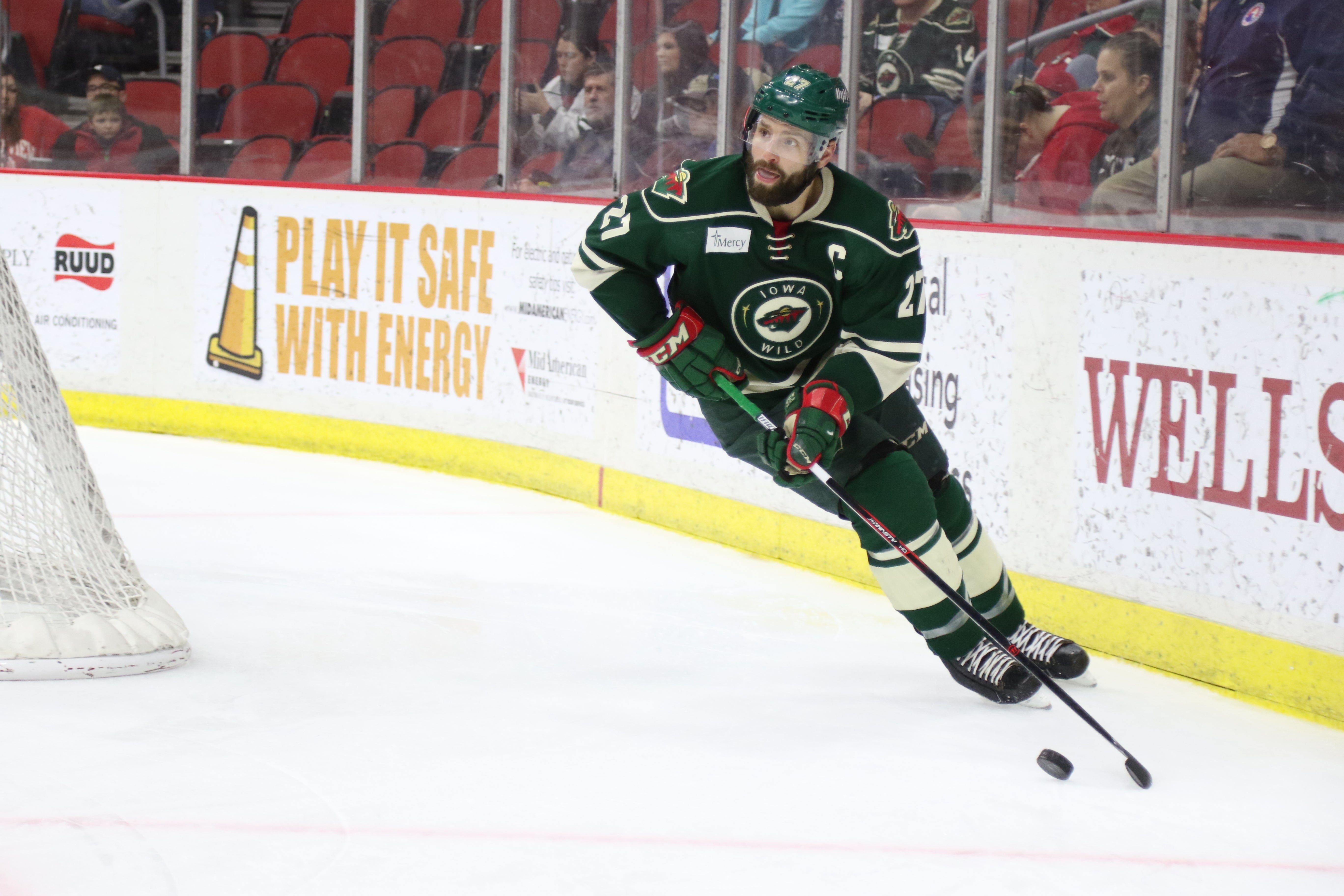 Following in Veilleux’s shoes as a captain for the Wild was defenseman Mike Weber, who manned the blueline for Iowa during the 2016-17 season, playing in 56 games. Initially joining the team on a professional try-out, Weber immediately made an impression on the organization and signed a contract in February for the remainder of the season.

After his one season with the Wild, Weber decided to play overseas, signing with Frolunda HC of the Swedish Hockey League for the 2017-18 season, manning the blueline with future No. 1 overall pick Rasmus Dahlin and former Wild players Sean Bergenheim and Johan Gustafsson. But ultimately after playing just 10 games in Sweden, Weber retired due to a knee injury.

Since retirement, Weber rejoined his junior organization, the Windsor Spitfires in the Ontario Hockey League, serving as an assistant coach for the past two seasons. 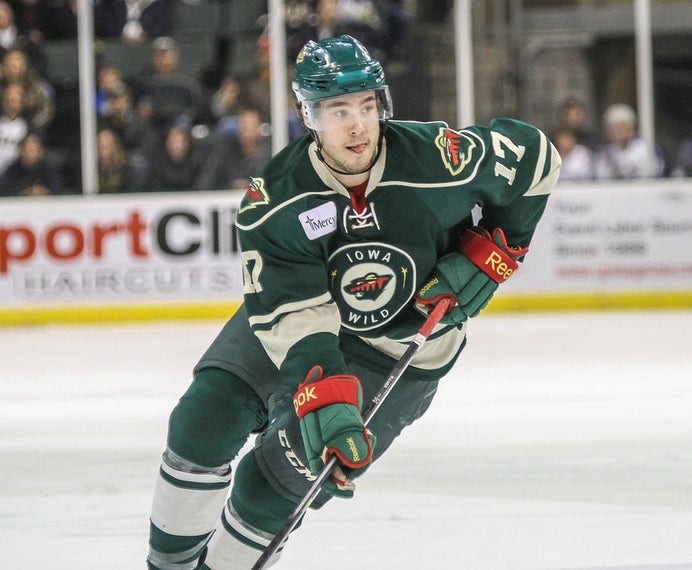 Bulmer’s name is etched in Iowa Wild history, as the 2010 second-round pick by Minnesota scored the first-ever goal in Iowa's franchise history in the team’s 1-0 win in its first game ever. That fateful goal came in Bulmer’s third of five seasons in the Wild organization, where he ultimately suited up in 203 games at the AHL level and added another 17 in Minnesota.

In 2016-17, Bulmer traveled across the Atlantic Ocean to play for Ilves in Liiga in Sweden for 23 games and spent another seven games with ERC Ingolstadt in the DEL in Germany. Bulmer returned to the US to skate with the Florida Everblades in the ECHL in 2017-18, recording 42 points in 70 games and another 13 points in 20 games in the playoffs, ultimately losing to the Colorado Eagles in the Kelly Cup Finals.

This past season, Bulmer played for the Fife Flyers, based out of Kirkcaldy, Scotland, in the EIHL in the United Kingdom. He notched 57 points in 57 games but the team fell in the quarterfinals in the playoffs. 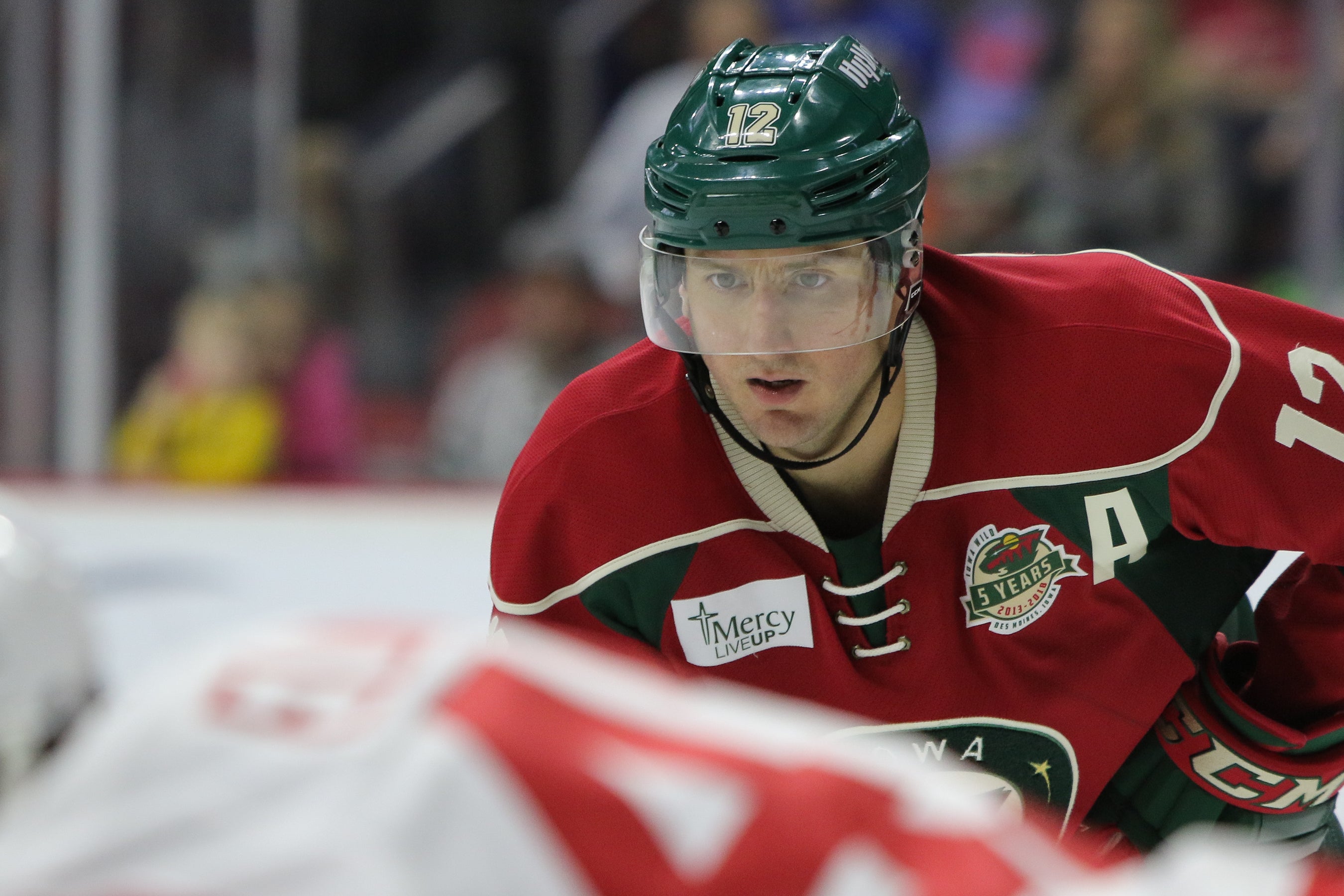 In just two seasons with the Wild, Cannone became a fan favorite and a veteran leader for the team. He finished his career with the Wild ninth in team history in assists, 10th in points and just outside the Top-10 in goals. Cannone joined the team in 2016-17 and skated in 149 contests, including every game in 2017-18, just one of four Iowa players to do so. He also was an assistant captain for both seasons.

After his two seasons with the Wild, Cannone signed with ERC Ingolstadt in the DEL in Germany, following in the footsteps of Bulmer. He played in 52 games and recorded 38 points and was named an assistant captain. This upcoming season, he will play for Schwenninger Wild Wings, also of the DEL. 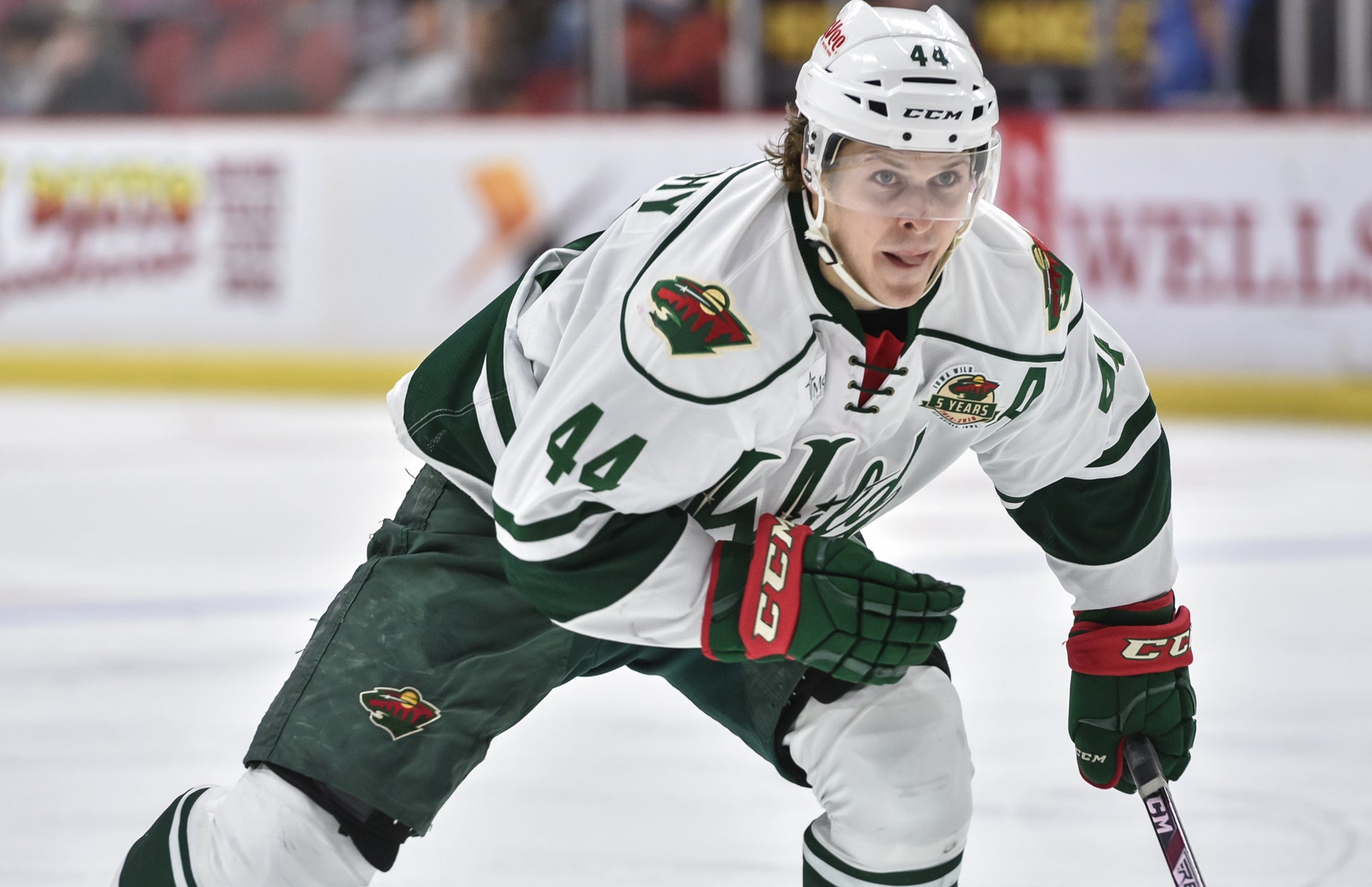 Bertschy was selected in the sixth round (No. 158 overall) of the 2012 NHL Entry Draft by Minnesota and made his North American debut in 2015-16, where he quickly became a scoring threat for the Wild. Bertschy skated in 184 games in the AHL and played in nine games with Minnesota during his three-year stint in the organization.

Bertschy was traded midway through the 2017-18 season to the New Jersey Devils and following that campaign, Bertschy returned to his native Switzerland to play in the NLA. Despite growing up playing for SC Bern, Bertschy signed with Lausanne HC. Since leaving the Wild, Bertschy also competed in the World Championships for Switzerland in 2018, recording two points in eight games and skating with current Wild member Kevin Fiala and former teammate Nino Niederreiter.