Minnesota Plays at 5:30 PM on Tuesday

Traverse City, Mich. – The Minnesota Wild and Dallas Stars met in the third game of the round-robin NHL prospects tournament in Traverse City with the Wild posting a 4-2 win. Forwards Joel Eriksson Ek, Justin Kloos and Dmitry Sokolov each scored a goal and added an assist in a balanced scoring effort. Matt Bradley also tallied as Minnesota improved to 2-1-0-0 in the tournament, clinching second place in the Lindsay Division. Wild goalie Adam Vay made 32 saves for the victory, while Stars goalie Jeremy Broduer stopped 28 in defeat. Minnesota plays its final game of the tournament on Tuesday at 5:30 PM CT at it meets the second place team of the Howe Division.

Minnesota capitalized on a late power play to claim a 1-0 lead through one period of play. Joel Eriksson Ek held the puck on the left-wing wall, dropping a pass to the high slot for Justin Kloos. The Wild forward slipped a pass to the right-wing circle for Dmitry Sokolov, who blasted a one-timer past Stars goalie Jeremy Broduer for the 1-0 lead. 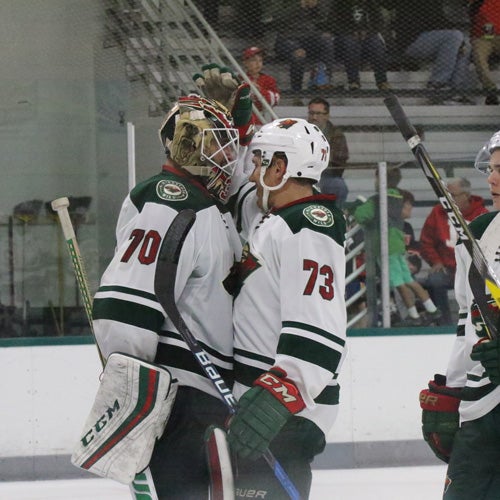 The Wild pushed its lead to two goals at 3:48 of the second period after Kloos scored his first of the tournament. Taking advantage of another power play, Minnesota’s Sokolov and Brennan Menell worked the puck cross-ice to Kloos, who beat Broduer with a one-timer from the left-wing circle. Minnesota expanded its lead to 3-0 less than two minutes later as Kloos led a rush into the Stars zone and centered for Eriksson Ek, who tipped the pass behind Broduer for at 4:57. Dallas managed its first goal at 6:28 as Roope Hintz snuck a wrist shot past goalie Adam Vay.

The Stars closed the gap scoring just 15 seconds into the final frame. Denis Gurianov snuck in behind the Wild defense for a breakaway and placed a backhander under the crossbar and behind Vay to make it 3-2. Minnesota pulled away for good at 14:32 when Adam Gilmour found Matt Bradley in the left-wing circle of the Dallas zone. Bradley snapped a wrist shot over the glove of Broduer for his first goal of the tournament. Forward Dante Salituro added an assist on the final goal of the night for the 4-2 final.

STREAMING: All Minnesota Wild games at the 2017 NHL Prospect Tournament will stream live within FOX Sports North's broadcast coverage area on Wild.com, FOX Sports GO and NHL.com. Fans can download the FOX Sports Go mobile app for free from the iTunes App Store, Google Play, Amazon App Store and Windows Store. To stream games, users will need to verify credentials by signing in with their pay-TV provider's user ID and password; there is no additional charge to use FOX Sports GO. All Wild games will also be carried live on Wild.com and feature the play-by-play commentary of Iowa Wild broadcaster Joe O'Donnell. He will be joined by Josh Fisher.

Fans outside of the FOX Sports North’s broadcast coverage are can view the streams via NHL.com

* All times listed are Central

The Iowa Wild p[lays a pair of preseason games, both will be in North Dakota against the Manitoba Moose – the Winnipeg Jets AHL affiliate. Iowa and Manitoba meet at the Ralph Engelstad Arena in Grand Forks, ND on Friday, Sept. 29 at 7 p.m.  The two teams play a second preseason game at the Scheels Arena in Fargo, ND on Saturday, Sept. 30 at 7 p.m. Iowa hosts its annual Green-White scrimmage at Wells Fargo Arena on Wednesday, Sept. 27 at 6 p.m.