Fans Can Catch Live Music Prior to Saturday Home Games

The concert series exclusively showcases local Iowa artists that will perform prior to every Saturday home game this season. The 60-minute live music session begins 90 minutes prior to puck drop. Depending on the size of the band or artists, the shows take place in various locations on the concourse at Wells Fargo Arena. Locations may include the south-side concourse, patio or platform, or the north-side Bud Light Bar. Jim Beam Vanilla drink specials are available for purchase at every Saturday home game. In addition, games such as bags and sauce toss are available for fans to enjoy during the performances.

“The Local Concert Series is something to get excited about,” said Iowa Wild President Todd Frederickson. “It’s a great way to embrace local artists and incorporate another element into our game-night experience for fans.”

Opening night starts with Brother Trucker, an Americana roots rock band based out of Iowa City. Other bands that set to perform are Decoy, Dirty Rotten Scoundrels and The Nadas. Artists Bruce Day, Ted Stockton and Damson Dotson are also performing during the 2017-18 Local Concert Series. 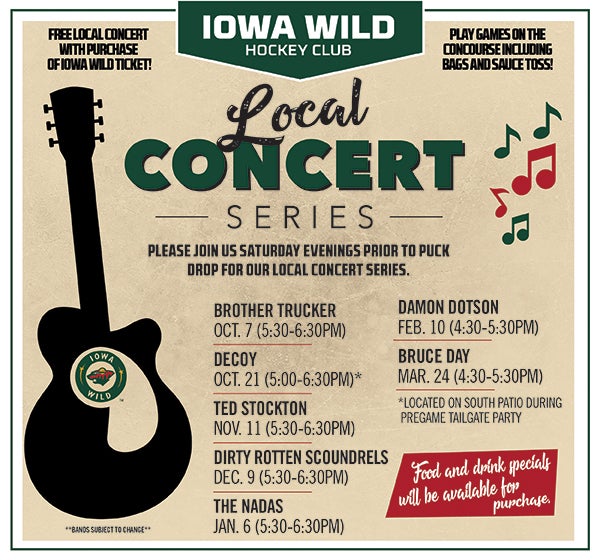 The Iowa Wild players will check in and pick up equipment on Sunday, Sept. 24 with the first day on ice starting at 10:00 a.m. on Monday, Sept. 25. Iowa hosts its annual Green-White scrimmage at Wells Fargo Arena on Wednesday, Sept. 27 at 6 p.m.  The 2017 Green-White scrimmage is designed for fans get their first glance at the 2017-18 Iowa Wild and help generate funds for the victims of the catastrophic events following the aftermath of the recent hurricanes. In lieu of a ticket, admission is free with a donation (of any denomination) to the Salvation Army, which will have representatives at each entrance of Wells Fargo Arena to collect funds used for disaster relief.

The Iowa Wild plays a pair of preseason games, both will be in North Dakota against the Manitoba Moose – the Winnipeg Jets AHL affiliate. Iowa and Manitoba meet at the Ralph Engelstad Arena in Grand Forks, ND on Friday, Sept. 29 at 7 p.m.  The two teams play a second preseason game at the Scheels Arena in Fargo, ND on Saturday, Sept. 30 at 7 p.m.