WILD SERVES UP THE WORKS TO BENEFIT CAN DO CANCER 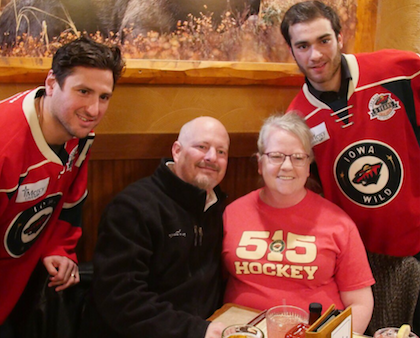 Decked out in their team sweaters, the five of them – four with NHL games under their belt – took food orders, delivered drinks and food, then cleaned off the tables for fans and family who gathered for dinner and to provide financial support to Can Do Cancer, a local volunteer cancer support charity established to help breast cancer victims cope with the demands of their daily lives as they undergo chemotherapy treatments.

“I’ve never done this before,” Menell, one of the Wild’s top rookie prospects, said, adding that he was up to the challenge. “I know it’s for a good cause.”

The appearance of the five Wild players was one of more than 100 events held since last April in which the Wild has given its name, and its players, to boost various charities and other community projects in the Des Moines area. Two nights later, Kunin, another top NHL prospect, prompted a storm of 650 teddy bears to rain down on the ice at Wells Fargo Arena, after scoring the Wild’s first goal that night as part of the club’s support for the patients of the Mercy Medical Center Pediatrics unit.

“It shows the kind of character we have not only on this team, but in the hockey organization in general,” Kunin said.  “I’ve never met a hockey player who wasn’t willing to give back. It’s just part of the culture, part of the game. It’s great to see,” he commented, after taking an order from a table of four.

Zane Pagliai, a partner in Centurion Construction Co., learned of the Wild’s willingness to participate in fundraising efforts when his company became a Wild corporate sponsor. Pagliai has been a Wild fan since the team arrived in Des Moines in 2013.

“When we decided to become a sponsor, we learned that this would be a good way to partner with them so we could give back to the community,” Pagliai said. “The fact that we are helping Can Do Cancer makes it that much better.”

Pagliai said he chose to hold a fundraising event for the Can Do Cancer because his aunt had been helped by the organization. He said that the Wild’s willingness to send players to help promote the event showed the kind of commitment the club has to the community.

“That commitment is very important, particularly for a community the size of Des Moines, which is growing very rapidly,” Pagliai said. “Having a professional team based in Des Moines gives everyone in the community something to root for. That brings the community together in a lot of ways.” 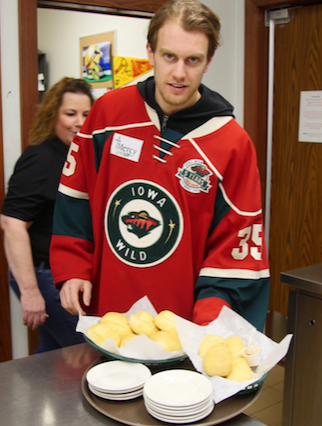 Heather Brewer, vice president and member of the Can Do Cancer board, said the Wild’s drive to support the event was an example of the club’s commitment to helping the community.

“We are a volunteer organization and basically run off of others who sponsor fundraisers for us,” said Brewer, who is a 12-year breast cancer survivor. “When large organizations like the Wild decide to put in this kind of effort for us, we can get our name out and spread the word about what we are doing for the community.”

Can Do Cancer is a volunteer organization that provides dinners for chemotherapy patients and their families during their treatment. The group also arranges for a house cleaning once a month during treatment, as well as providing support services.

“It’s wonderful because the more we get the word out, the more help we provide,” Brewer said. “When groups like the Iowa Wild and Centurion Construction do the leg work for us, it just makes our job easier.”

For fans like Jerry and Diane Hooten, and Rick and Cindy Oliver, the chance to get to know the players and get a picture with them was more than worth attending the event.

“I love hockey and I’ve been a big fan of the Wild since they got here,” Diane Hooten said. “I wouldn’t have missed this for anything.”

“It’s taking a while, but you begin to see more and more support,” he said.  “These events help.”

At the end of the night, the Wild helped raised $600 for Can Do Cancer, and several players could now claim experience as waiters.

“It’s a pretty cool experience to get to meet our fans and to talk with them,” Kunin said. “It’s important for us to be involved in the community.”