Traverse City, Mich. – The Minnesota Wild and St. Louis Blues prospects met in the first game of the round-robin NHL prospects tournament in Traverse City with the Wild posting an incredible rally for a 6-5 win. Trailing 5-1 with under 10 minutes remaining in regulation, Minnesota’s prospects rallied to scored five unanswered goals over a stretch of 8:54 to take its first game of the tournament. Luke Kunin scored twice, including the game-winning goal with 1:02 left in regulation to cap off the rally. Joel Eriksson Ek and Gerald Mayhew each had a goal and added an assist, while Mason Shaw chipped in with two assists in the victory. Giorgio Estephan scored the game-tying goal with 1:35 remaining in regulation. Goalie Adam Vay secured the Minnesota win with 24 saves on 29 shots. St. Louis goalie Evan Fitzgerald suffered the loss with 21 saves on 27 shots. Minnesota plays its second game of the tournament on Saturday at 6:30 PM CT versus the Columbus Blue Jackets prospects.

St. Louis opened the scoring off a turnover in the Minnesota zone. Defenseman Jake Walman took advantage, sending a cross-ice pass to forward Adam Musil for a one-timer at 10:52 of the period. The shot trickled in behind Wild goaltender Adam Vay for the 1-0 lead on the period’s lone goal.

Minnesota responded by tying the game 4:23 into the second period for the 1-1 score. Captain Joel Eriksson Ek started a transitional rush through the neutral zone and flipped the puck ahead for Mason Shaw. From the left wing, Shaw snapped a pass to Ivan Lodnia on the backside of the St. Louis crease. Lodnia planted the puck past goalie Evan Fitzpatrick for the tying goal. The Blues answered back with three goals over a stretch of 3:35, which included two goals in a 17-second frame. Blues winger Alexey Toropchenko potted a rebound at 10:13, pushing St. Louis in front 2-1. Just 17-seconds later St. Louis struck again as Robert Thomas beat Adam Vay over the shoulder for the 3-1 Blues lead. At 13:48 the lead blossomed to 4-1 as defenseman Niko Mikkola feathered a wrist shot through traffic and past Vay. 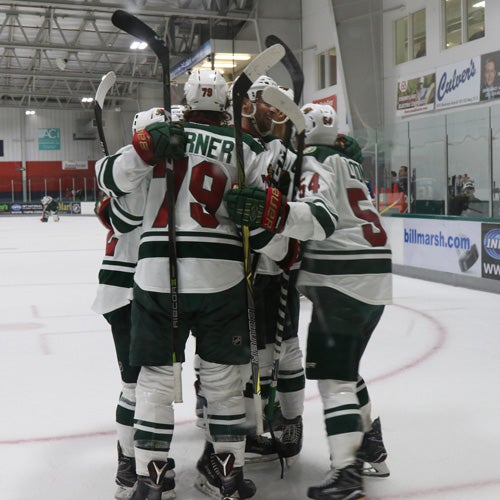 The Blues prospects expanded their lead to 5-1 at 4:38 of the third period after a power-play goal from Klim Kostin. Minnesota started its rally at 10:54 after Luke Kunin slipped in a rebound for his first goal of the night. Forwards Gerald Mayhew and Justin Kloos each had an assist on the goal that made it 5-2 in favor of St. Louis. Eriksson Ek stole the puck from a Blues defender and snapped a wrist shot past Fitzgerald to trim the Minnesota deficit to 5-3. Merely 54 seconds later, Mayhew tipped a point shot from defenseman Gustav Bouramman, beating Fitzgerald and bringing the Wild within a goal at 5-4. With the goalie pulled, Minnesota tied the game 1:30 seconds later as Giorgio Estephan stuffed in a rebound for the game-tying goal. Defenseman Carson Soucy and forward Shaw each had an assist on the goal. With 1:02 left on the clock and 33-seconds later, Kunin snapped a wrist shot past Fitzgerald for his second goal of the game for the 6-5 final.

STREAMING: All Minnesota Wild games at the 2017 NHL Prospect Tournament will stream live within FOX Sports North's broadcast coverage area on Wild.com, FOX Sports GO and NHL.com. Fans can download the FOX Sports Go mobile app for free from the iTunes App Store, Google Play, Amazon App Store and Windows Store. To stream games, users will need to verify credentials by signing in with their pay-TV provider's user ID and password; there is no additional charge to use FOX Sports GO. All Wild games will also be carried live on Wild.com and feature the play-by-play commentary of Iowa Wild broadcaster Joe O'Donnell. He will be joined by Josh Fisher.

Fans outside of the FOX Sports North’s broadcast coverage are can view the streams via NHL.com.

* All times listed are Central

The Iowa Wild plays a pair of preseason games, both will be in North Dakota against the Manitoba Moose - the Winnipeg Jets AHL club. Iowa and Manitoba meet at the Ralph Engelstad Arena in Grand Forks, ND on Friday. Sept. 29 at 7 p.m. The two teams will play a second preseason game at the Scheels Arena in Fargo, ND on Saturday. Sept. 30 at 7 p.m. Iowa hosts the Green-White scrimmage at Wells Fargo Arena on Wednesday, Sept. 27 at 6 p.m.